Big brother under the bumper 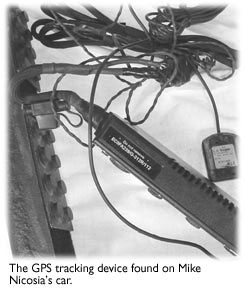 Ever get the sneaking suspicion you are being watched? Maybe you should look under your bumper. On Sunday, July 6, three Boulder residents discovered sophisticated Global Positioning System (GPS) devices attached to the bottom of their cars, apparently used by someone track the whereabouts of their vehicles. The devices contained no immediate clues as to who planted them or who used them to collect information, leaving the residents with troubling questions: Who would be willing to spend the time and energy to track them? And are we all being watched far more carefully than we might want to imagine?

New York native Mike Nicosia is passionate about protecting animals. He's been this way ever since he learned of their plight six years ago [...] Nicosia became a vegan, participated in animal-rights protests and launched a Long Island chapter of The Coalition to Abolish the Fur Trade. "We have a no-nonsense approach to destroying the fur trade," says Nicosia of the organization. "That means protests, civil disobedience and outreach, as well as supporting the ALF." ALF stands for the Animal Liberation Front, a controversial organization that combats animal abuse by releasing animals from testing laboratories and destroying the property of those they deem to be exploiting animals.

While Nicosia says he had no direct connections with the ALF, he publicly supported the organization's tactics. That was when the surveillance began. Nicosia says wiretaps were installed on his phone. He was photographed at protests. Plainclothes officers would follow him to his car. He also received death threats from people within the fur industry. One prominent fur community member was eventually issued a restraining order after repeatedly threatening Nicosia's life [...]

Federal surveillance is a routine part of [Rod] Coronado's life, and he says officials have been increasingly interested in his activities since he began visiting the homes of Maxxam executives. [Coronado is Nicosia's roommate.] That doesn't mean he wasn't surprised on Sunday morning, July 6, when he was attaching a trailer hitch to his car and noticed something underneath his vehicle that wasn't supposed to be there.

Nicosia says he was inside asleep that morning when Coronado discovered the large black devices attached behind the rear bumpers of his and his girlfriend's cars on the driver's side. When Nicosia woke up, Coronado showed him the strange tangles of wires and electronics. Nicosia immediately became curious if such a device had also been planted on his car. It took just a moment to discover the answer.

While Nicosia and Coronado are not GPS experts, they immediately assumed the devices found on their cars and Coronado's girlfriend's car were GPS systems, especially since one component was labeled GPS Antenna. When Nicosia brought his device to GPS Solutions, a Boulder-based software developer of high-accuracy GPS technology, chief engineer Jim Johnson confirmed their suspicion.

When attached to the car, the GPS antenna likely points downwards towards the ground, to pick up signals from GPS satellites that bounce off the road. This information is sent to the GPS receiver, which determines its location at least within 100 meters, says Johnson. This information can then be transmitted from the car to an outside source using the modem and cellular antenna, just like a normal cell phone call. The computer chip can be programmed to determine when the information is transmitted. It's possible the information was sent out on a set schedule, or if the vehicles entered or left a specified area.

But where was the GPS information sent? The answer is not readily available. One thing is for sure, however: The devices are not cheap. "They are putting some money into it," says Johnson about the systems, which he estimates could cost about $2,000 each [...]

Another enigma is who built these devices, which Johnson says were probably custom made. While the GPS antennas are labeled with serial numbers and the manufacturer name Trimble, one of the leading developers of GPS technology, other components in the device are not made by Trimble, says Johnson. Most of the components contain no labels at all, making them untraceable. When Trimble was contacted and asked if the antennas' sales histories could be tracked using their serial numbers, the company spokesperson did not respond before press time [...]

While he has no definitive proof, Coronado has several theories as to who was tracking the vehicles. The most obvious suspect, he says, is the FBI. "I believe it was the federal authorities," says Coronado. "I think that the technology is beyond that of the private sector. The days of an FBI parked in a dark sedan in front of our house are over." Coronado is no stranger to the FBI. Agents often show up at animal rights and environmental demonstrations he takes part in, says Coronado. Last year the FBI's top domestic terrorism official told a congressional hearing that ALF was one of the most active domestic terrorist organizations, and that at least 26 FBI field offices around the country were dealing with ALF activities [...]

Another clue that might link the GPS systems to the FBI are three hand-written numbers discovered inside of the devices' battery packs, a different number for each device. The numbers -- 141, 142 and 447Đcould be used for tracking purposes, says Coronado, and could suggest that the devices might be part of a much larger fleet of similar systems -- a fleet that could only belong to a major organization. FBI spokesperson Ann Atanasio could not explicitly say whether or not the FBI had a role in the matter. "I cannot confirm or deny the existence of an investigation," says Atanasio, who also could not comment on FBI tracking techniques or its position on the ALF [...]

Another suspect could be the Maxxam Corporation, which Coronado and his compatriots have been protesting. After all, says Coronado, since the company had enough money to recently sponsor a prominent ad campaign labeling Coronado an eco-terrorist, they should have enough money to electronically track Coronado's whereabouts. When contacted, Maxxam spokesperson Josh Reiss declined to respond to the allegations.

A third possibility, says Coronado, is the Center for Consumer Freedom, a nonprofit coalition sponsored by restaurants, food companies and tobacco corporations that oppose "anti-consumer activists." The Center has been actively discouraging venues around the country from sponsoring Coronado's seminars, calling him a domestic terrorist. Mike Burita, communications director for Center for Consumer Freedom, says the organization does not partake in cloak and dagger techniques.

"The suggestion we put a GPS (device) on Rod Coronado's car is ridiculous," he says. "We are not in the business of covert surveillance" [...]

"GPS is used for an amazingly large number of things, much more than it was originally (designed) for," says Johnson.

GPS technology was first unveiled in 1982 as a military tool. Back then a GPS receiver cost about $200,000 and weighed 150 pounds. There were only six GPS satellites, meaning that there was only a small window of time each day that there were enough satellites in range for an accurate GPS reading. Today GPS receivers weigh only a few ouncesĐsmall enough to be installed inside cell phonesĐand are surprisingly inexpensive. Johnson says one of the cheapest components in the GPS devices found in Boulder is the receiver. Now there are 24 satellites in the sky dedicated to GPS tracking. And GPS systems are popping up everywhere.

"It can be used for anything you can think of to track moving objects," says Johnson. Companies and organizations like GPS Solutions use the technology to monitor the motion of the earth's crust and atmospheric pressure and temperature, among other things. GPS systems are used to locate vehicles ranging from police cars to taxis to forklifts in factories. One Boulder-based company, Intuicom, has installed GPS devices on Boulder buses and tracks their location around the city on their website [...]

"Certainly there are ethical issues," says Johnson about GPS technology. "The downside of GPS is it is a military weapon, and there are privacy issues down the line." [...]

"My impression is that our government knows they are going too far," says [Betty] Ball [a Boulder activist who works at the locally based Rocky Mountain Peace and Justice Center]. "They are implementing laws and policies going against the will of the people to the degree they are going to get massive resistance, and that is why they came up with the Patriot Act, and this means of GPS surveillance, and surveillance of our computers and websites and e-mail and all that kind of stuff. It's all part and parcel of the same thing, that the government knows they are going to encounter massive resistance, so they are taking every opportunity right now to create the controls to control us."

The only option, says Ball, is to fight tooth and nail to protect U.S. civil liberties from being eroded by new legislation and new technologies. "[The government] is trying to scare usĐthey are using these intimidation tactics to scare people. And we can't afford to let that happen," says Ball. "The more people that get involved, the more people who resist this kind of thing, the better off we are going to be." [...]

(Written by Joel Warner and Pamela White, and published July 2003 in The Boulder Weekly.)