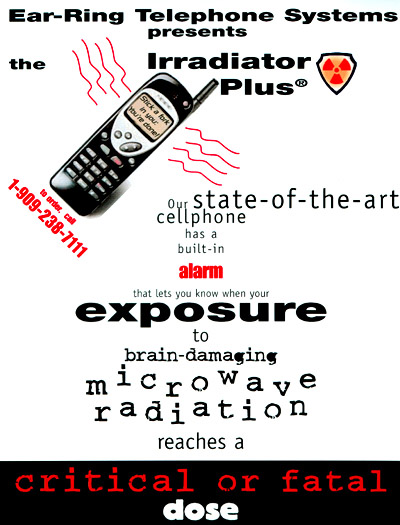 Unfortunately, if you live in a city such as New York, the answer is "yes." The danger lies in the large and growing number of "telecommunication transmission facilities" that giant companies (Omnipoint, Bell Atlantic, Sprint, ATT, Nextel and Cellular One, among them) have installed all over the place. These mini-facilities or, rather, networks of these mini-facilities, are what allow cell-phone companies to provide mobile service, no matter where the customers want to use their phones. This is especially "desirable" (marketable) in Manhattan, where the tall buildings frequently block the wireless signals from going through.

The problem is that the transmitters in these networked "facilities" are just too powerful to be used safely in residential areas and should only be used in other areas under certain circumstances. Not only do these transmitters use concentrated beams, which are more dangerous than the diffuse kind, but they're also always on, constantly cutting through the buildings and people who are "in the way." To make matters worse, the various companies use different frequencies, which means that, when their respective networks criss-cross or overlap, the power density (and thus the risk of over-exposure) is dramatically increased.

For residents of the City of New York, the turning point came in July 1998. Prior to that, under local Zoning Regulation 22-21 (passed in 1984), a cell-phone company had to obtain a special permit from the Board of Standards and Appeals before it could install a "telephone exchange or other communications equipment structure" in a residential neighborhood. To be granted such a permit, the company had to fill out a detailed application that, to be filled out properly, cost as much as $75,000 in engineering, architectural and legal fees; and the company had to answer the questions and listen to the objections of the community in which the structure was to be erected. 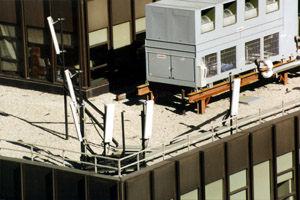 
Though it was rarely enforced and based upon industry-generated reassurances about "safe levels" for microwave exposure over long periods of time, Zoning Regulation 22-21 at least provided some assurance that the health of the people of the city would be protected, even if it meant that the cell-phone business didn't grow as fast here as it was elsewhere. But, in July 1998 -- under the "pro-business" administration of Rudolph Giuliani -- Richard Visconti, the Deputy Commissioner of the Department of Buildings, issued a "Technical Notice" that effectively repealed the provisions of Zoning Regulation 22-21. Ever since then, cell-phone transmitters have appeared all over the city. 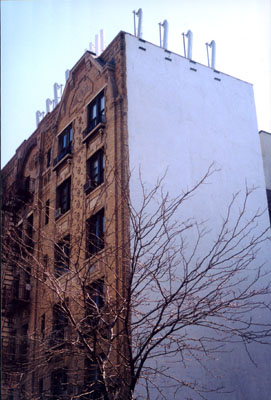 
These transmitters -- or, rather, their receiving antennae -- are easy to spot. They are short, thick "panels," vertically oriented, gray or white in color, and installed in groups of 3 or 4 in a row. Sometimes there are several of these multi-paneled rows installed on a single rooftop. 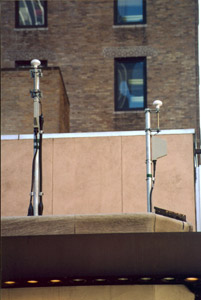 (Transmitters just a few feet above a Manhattan street.)


The transmitter, properly speaking, is a thin, gray-colored tube of metal with a golfball-sized thing at the very top. It is usually installed on or next to one of the rows of panels. If you look 5 blocks up and down the street, and in the direction that the panels are facing, you may be able to spot the next installation in the network. 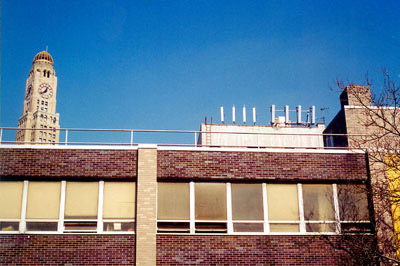 (Cell-phone transmitters on a Brooklyn school.)


The legality of all this is questionable. First: under the City Charter, (only) the City Planning Commission has the authority to write or amend the Zoning Regulations. The Department of Buildings has no such authority. Second: by amending Regulation 22-21 in such a fashion that community input is no longer required, this Richard Visconti undermined the democratic right of the people of New York to be heard on issues that affect them directly. Third: federal (FCC) regulations, which still apply here, mandate that such installations be accompanied by things that cell-phone companies haven't bothered to install: warning signs and fences.