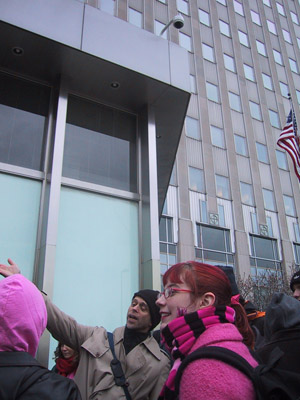 Between Wednesday 26 March and Saturday 30 March 2003, Bill Brown of the New York Surveillance Camera Players was in Chicago, Illinois. Brought to the "Windy City" by the Version 03 arts festival, Bill spent his first two days making a map of surveillance cameras installed in public places in "the Loop" (downtown Chicago). Once completed, this map was photocopied (100 copies) and -- thanks to Wade, who put Bill up for the duration of his stay -- scanned and uploaded to Chicago Indy Media, along with an annoucement that in two days Bill was going to offer a walking tour based upon it. (By the time he offered the tour, Bill had corrected the map in a couple places in which cameras marked "private" were actually "government". The version on display here is not the original but the corrected version.)

Judging from the Loop -- the area defined north and south by Lake and Congress, and west and east by Wacker and Michigan -- Chicago has almost as many surveillance cameras per square-block as parts of New York City (Manhattan). In downtown Chicago, Bill counted a total of 228 publicly installed cameras, which averages out to approximately three cameras per square city-block. (In Manhattan's most heavily surveilled neighborhoods, the city-block average is four or more.) Once again like certain areas in New York City (e.g., Wall Street), the Loop has a lot of cameras installed on buildings owned by the city, state or federal government (59 of them), but the vast majority of the total cameras in the area (166) are installed on privately owned buildings.

Because (1) at least a couple of these privately owned buildings (the Sears Tower and the Chicago Board of Trade) are among the most important buildings in the entire country, (2) these national landmarks are located very close to each other, and (3) these landmarks are also located very close to (get this!) a federal correctional facility, a bank that is part of the Federal Reserve system and no less than three federal buildings, the 12-square-block area along Jackson between State and Wacker contains one-third (71) of the total number of cameras in the Loop. At six cameras per intersection, this area must be one of the most heavily surveilled in all of America.

Among the most interesting cameras on the map are the "elevated" ones, all three of which do not point down, at the ground, but across, along the horizon. Two of them are obviously pointed towards the Sears Tower. Certainly a local TV station or a web-camera operator would love to have such a view; but so would the Chicago Police Department (CPD), the FBI and the FAA (O'Hare International Airport is just to the west). Also of particular interest is the camera that someone (the CPD perhaps) is using to watch automobile traffic coming across the draw-bridge at Washington and Wacker. Easily the biggest, oldest, and ugliest surveillance camera Bill has ever seen, it looks like a relic from "the good old days" (early 1970s), a momento, something that its owner just couldn't bear to give or throw away.

At noon on Friday 28 March 2003, Bill gave a short presentation on the activities of the New York SCP at a panel on "security" organized by Tiffany Holmes for the Version 03 festival. Other participants included Marc Bohlen (who spoke about data-mining), Brooke Singer (data stored on motor vehicle licenses) and John Freyer (data that is personal). Held at the Museum of Contemporary Art (MCA), the staff of which (sorry to say) were either incompetent or irritable, this panel was poorly attended; there were only 20 people in the audience. To make matters worse, the panel was held in a large and cold theatre. There was a definite sense of emptiness, of festival organizers who failed to attract people to a location at which it should have been easy to attract lots of people. Nevertheless, a few people asked questions afterwards. Bill managed to distribute several copies of his map.

Later that afternnon at the MCA, Bill had the misfortunate of seeing a panel on "tactical media" organized by Geert Lovink. Well-attended (the organizers themselves were part of the audience), this panel included Ange Taggert and James Leadbitter, three guys (including "Nathan Hactivist") from Carbon Defense League, and Joanne Richardson, the publisher of Subsol. Each presentation was drearily alike in both form (irony) and content (commodities and corporate advertizing). None of these bad artists concerned themselves with politics, war (in Iraq and elsewhere) or their effectiveness as activists. In a word, they were boring.

The only reason Bill stayed for the "discussion" sesssion held afterwards was to ask Richardson what the fuck she meant when, in the context of her typically superficial remarks on the "ironically fascist" band Leibach and one of its admirers (the Leninist academic Slavoj Zizek), she took an out-of-nowhere pot-shot at the Situationist International. Bill had mentioned the SI in his talk and in an anti-artist polemic he'd written that had been re-printed by Version 03 in its "reader," copies of which were available everywhere at the festival.

But he never got a chance to ask his question. He raised his hand, hoping to be "recognized" by Geert Lovink, who, microphone in hand, continued to moderate, despite the fact that this was now supposed to be an informal question-and-answer period (the chairs had even been arranged in a circle to facilitate "free conversation"). Worse, Lovink answered questions (indeed, every question) from the audience as if he himself were a panelist. Other people eventually got "called on." One person rightly criticized Anne Taggert for copyrighting her videotaped documentation of her reputedly anti-commodity performances. After Taggert failed to adequately address this criticism, it -- indeed, the legitimacy and usefulness of criticism itself -- was set aside by one of the guys from Carbon Defense League. "There's been too much criticism," he said; "it's time to show each other support instead." Hoping to jump right into the trap just set, Bill raised his hand again. Yet again, he wasn't "recognized" by Geert the Immoderator. The person who was called upon persisted in being critical: he wanted to remind everyone of the unsettling connections between copyrights, "brands" and the branding of cattle. Here Lovink jumped in and took up the position taken by the guy from Carbon Defense League. "Criticism," proclaimed the Immoderator, "is out-dated." For Bill, this was too fucking much.

"Why? Because you say so?" he called out to Lovink. Everyone heard him, heard his irritated tone. Heads turned. Who the fuck is this? From the front of the room, Joann Richardson was staring. But Geert Lovink, apparently oblivious to the "rude interruption," continued to talk into the microphone. "What was your point?" someone called out. "He's proven it for me," Bill replied, indicating Geert. And then Bill got up and walked out.

At 2 pm on Saturday 29 March 2003, Bill attended a poorly attended but very inspiring workshop concerning "strategies for public protest in the age of surveillance," which was conducted by the feminist, Chicago-based performance group Pink Bloque. In its statement for the Version 03 festival, this group (previously unknown to Bill and the rest of the SCP) noted that,

Recently, surveillance cameras have been placed on city streets -- in front of stores, office buildings, and popular protests spots, [thereby] allowing city, state, and federal agents to monitor all activity on the street. What are the implications of this constant surveillance for political actions and strategies whose aims are to make a visual spectacle of protest? How, if at all, can these surveillance apparatuses be used/co-opted by the radical left? How should we dress to impress while they watch to repress? If all the world's a stage, then how can we make the streets the set of a radical leftist music video?

The Pink Bloque's answers to these questions are simple and virtually identical to those offered by the SCP: perform directly in front of these cameras, and do so in a way that "the message" both fulfills and defies conventional expectations. The only difference between the two fun-loving groups is that, unlike the SCP, which uses silence, pantomimed action and printed placards to get people's attention, the Pink Bloque uses pop music, dancing and costumes (all-pink attire).

At 3:30 pm on that same day (Saturday), Bill led a walking tour of the Loop based upon the map he'd made. In attendance were about 30 people, including several members of the Pink Bloque (see photo above) and people attracted to the tour by either Bill's presentation on the prior day or his postings to the Chicago Indymedia Center. Starting out underneath the cluster of traffic and private cameras installed at the corner of Randolph and Michigan (i.e., diagonally across the street from the Chicago Cultural Center, at which the Pink Bloque's workshop had taken place), the group proceded up to and then west along Lake, where it studied an elevated camera. At State, the group walked south to look at one of the newly installed traffic (police?) cameras installed on a city owned light pole on Randolph. Finally, the group turned west to look at some of the government-operated cameras along Dearborn.

Because it had started snowing (cold weather for late March, even in Chicago), Bill ended the tour properly speaking, bid farewell to those who wished to leave and then began a second one. Seven in number, this group of hardcore devotees preceded to the relic from "the good old days," crossed the river to check out what was going on at Boeing, and then (finally) gave it up and went inside somewhere to get a cups of hot coffee.

Upon returning to New York, Bill learned that two people on the walking tour are going to start making new maps of Chicago and giving walking tours based upon them. Not a moment too soon: on 11 July 2003, the Mayor's office announced a drastic increase in video surveillance by the Chicago Police Department.