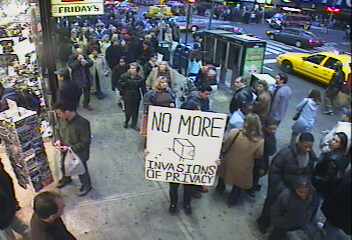 (Screen shot from one of Earthcam's many webcams in Times Square, NYC.)

"We're offering a window on the world that is very much like sitting in a restaurant and looking out on the street. To try to inhibit this by saying it represents a brave new society where people are losing their privacy is far-fetched." -- Brian Curry of Earthcam, 6 October 2002

Though they are both registered and operated by UN Productions, Inc., an "Internet design and consultation group" founded in 1996 and headquartered in Hackensack, New Jersey, Earthcam.net and Earthcam.com are different, or, rather, emphasize different things.

Unlike its scary Big Brother, Earthcam.com doesn't really sell anything (other than advertizing space); it provides free on-line entertainment to Web-browsing voyeurs and cyber-tourists, who can either watch properly "spectacular" events such as the Daytona 500, New Year's Eve celebrations and the Super Bowl, or can access the company's world-wide network of webcams and watch "everyday" people going about their business. In other words, Earthcam.com creates or stimulates the demand for video imagery in general.

And so, there you have it: Earthcam.net and Earthcam.com; supply and demand; a very neat and no doubt lucrative arrangement (both sides of the coin, if you will).

But what of the privacy rights of individuals? Neither of the Earthcam Brothers nor UN Productions itself have statements on their respective home pages that explain their policies concerning the privacy rights of the people who have been videotaped without their knowledge and without their consent. Exploiting the absence of laws banning such outrages, Earthcam has installed most of its webcams in highly populated public places in urban areas. These webcams are not accompanied by signs that properly warn passersby that they are being videotaped and secretly watched by an audience that might number in the tens of thousands. Worse still, some of these webcams are positioned so close to the ground that they capture pictures of the faces of individual people as they walk by! In short, Earthcam's webcams do things that the framers of the U.S. Constitution -- the Fourth Amendment, in particular -- made sure that (even) the police couldn't do without getting a search warrant, namely, systematically conduct nonconsensual searches and seizures of visual information about people.

The SCP-New York are concerned that it's only a matter of time before UN Productions outfits its "Earthcam" webcams with face recognition software, against which the SCP-New York has been fighting since October 2000. Face recognition software would give Little Brother just what he needs: the ability to match database entries against the faces of "noteworthy" people (famous celebrities or notorious criminals) who are spotted by his webcams.

As part of his research for an article about the SCP that was eventually published in The Village Voice, Geoffrey Gray asked UN Productions about face recognition software, and supposedly received the reassurance that the company would not install it on Earthcam's webcams. Most unfortunately, the published version of Gray's article didn't include this newsworthy reassurance or any reference whatsoever to the SCP's objection to Earthcam's use of webcams in highly populated public places. (Gray claims that he'd also been told that Earthcam was aware of the SCP's existence because the company had seen people waving signs in front of its cameras, which certainly supports the SCP's contention that Earthcam's webcams capture a lot more than panoramic or "scenic" views of the streets on which they are installed.)

On Wednesday, 28 March 2001, the SCP's Bill Brown called Earthcam's 1-800 number (1-800 327 8422) with the intent of getting independent confirmation of what he'd been told by Geoffrey Gray. Brown was put in touch with someone who would only identify himself as "Brian." (This was perhaps Brian Cury, who is identified by UN Productions as the head of its creative team and who is listed as the Administrative Contact for the Earthcam Web site.) "Brian" wouldn't say whether Earthcam had any plans to install face recognition software on its webcams. Though he claimed that the SCP's Web site contained several "inaccurate" claims about Earthcam, he wouldn't say what those inaccuracies were. "Brian" dismissed Bill's concerns and objections as those of "the minority" (as if the right to privacy was up for a vote, rather than the law of the land), declared himself "too busy" to talk any more, and hung up. One would have thought that such a person would have been better at public relations or, at the very least, would have known better than to give a committed activist yet another good reason to protest. . . .