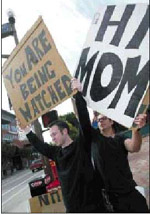 A member of Generation X and a self-described political activist, Chuck Banaszewski can be considered something of an anomaly. But if the Tempe resident had it his way, he would be just another average citizen, socially aware and free-spoken.

"It's about getting people to think for themselves," he said. Banaszewski, a graduate student in theater for youth at Arizona State University, is the founder of the Arizona Surveillance Camera Players [AZSCP]. Inspired by a New York-based organization of the same name and guided by his own penchant for activism, he started the group in February 2001 to protest the cameras positioned along Mill Avenue and in other high-traffic spaces, such as bars.

"As an artist and an actor, I try to push the boundaries, and so does the government," said Banaszewski, 30. "No one knows they are being filmed. They [the cameras] are violating everybody's right to privacy."

About once a month, members of AZSCP -- most of whom are students at ASU [Arizona State University] -- gather at Sixth Street and Mill Avenue, where they are caught on tape by a camera that broadcasts images on the Tempe city government Web site. There, they stage performances while holding cardboard signs angled towards the lens. "Big Brother is Watching U" reads one poster; "Hi Mom" is scribbled on another.

On a recent Saturday morning, the presence of Banaszewski and fellow AZSCP member Dustin Hurtt on Mill Avenue rose a few eyebrows, moved a young man to moon the camera, and was enough to make Scottsdale resident Mike Perczak vacate his seat at Coffee Plantation. Mug of coffee in hand, Perczak engaged in conversation with the pair, skimmed over the AZSCP flyer and then offered to hold a sign.

"I think they have a valid statement to make about what's going on," said Perczak, 44. "You can't cure all the world's ills on a street corner, but this is certainly a start. I'll have more to think about now."

Perczak's is exactly the kind of audience reaction Banaszewski hopes for. "I'm here to try to create critical thinking," he [Banaszewski] said. To that end, surveillance cameras aren't the only issue AZSCP tackles -- any "violation of human rights" is fair game. Most recently, the group has set out to point a finger at passivity because as, Banaszewski put it, "most people don't do anything unless a freeway is being built in their back yard."

For the performance, titled "Universal Protest Sign," Banaszewski holds a blank piece of cardboard and waits for curious passers-by to ask him what the sign says. At his prompting, some will tell Banaszewski it's about the homeless, or the First Amendment. Others conclude that it means nothing, to which he replies, "Well, that doesn't surprise me because most people today have nothing to say. It's not meant to be rude," Banaszewski explained. "But hopefully when that person walks away, they'll think, 'Why don't I have anything to say?'"

(Written by Jennifer Wood and published in the 10 March 2003 issue of The East Valley Tribune.)

Home page of the