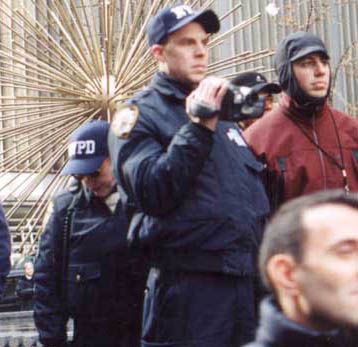 Originally proposed in December 1980 as part of the settlement of a May 1971 lawsuit brought against the New York Police Department's Bureau of Strategic Services (the infamous "Red Squad") by Barbara Handschu, Abbie Hoffman and 14 other people, the Handschu Consent Decree ("HCD") created the Handschu Authority, which was supposed to make sure that the NYPD abided by a set of guidelines that regulated the police's use of photographs and videotapes to surveill the political activities of people who were not suspected of engaging in any criminal activity. Made up of lawyers from the New York Police Department (NYPD) and the Mayor's Office, the Handschu Authority was to be informed and grant its permission if the NYPD wanted to violate the Fourth Amendment's provisions against unreasonable search and seizure. Because of the one-sided composition of the Authority itself and the original court's desire to regulate rather than ban unconstitutional surveillance of political groups, the HCD was contested in 1984 by a variety of individuals and groups, including Howard Zinn, Grace Paley, the Communist Party, Paul Avrich, Allen Ginsberg, Peter Orlovsky, Bertell Ollman, Paul Robeson, Jr., and many, many others. In 1985, U.S. District Judge Charles Haight ruled against the challenge to the HCD, which is when it became "law." Well-intentioned but fatally flawed, the decree was evaded or ignored almost as soon as it was signed into law.

Every day for two straight months in 1987, the NYPD's new Technical Assistance Research Unit (TARU) illegally monitored and taped a morning call-in show on WLIB, a "black liberation" radio station. In September 1998, the NYPD used officers on foot and in helicopters to illegally videotape people at the Million Youth March in Harlem. In October 1999, the same thing happened (to hundreds of counter-demonstators) at a tiny Ku Klux Klan rally held in Manhattan. In May 2000, the NYPD allowed spies from the Philadephia Police Department to take pictures of anarchist demonstrators at a political rally. When complaints were made, the Handschu Authority ruled that there had been no violation in each and every case.

And yet the HCD, the very fact that it existed (at all), must have continued to piss off the NYPD, which is the only police department in the USA that operated under such an explicit obligation to respect the Fourth Amendment to the US Constitution. (Because of its abuses, in 1982 the Chicago Police Department was also forced to sign a similar consent decree, but it was gutted in January 2001 by the 7th Circuit US Court of Appeals.) Otherwise, why bother to propose to Judge Haight that Handschu should be officially repealed, which is exactly what NYPD Commissioner Ray Kelly did in late September 2002?

In a pair of excellent articles about the HCD for Newsday, Leonard Levitt reported that "Kelly could not cite one instance, real or hypothetical, in which the Handschu guidelines hindered police in fighting terrorism" (30 September 2002), nor could the NYPD Commissioner cite any "specific instances where the [Handschu] guidelines had curtailed criminal investigations" (7 October 2002). And so, Levitt stated, "the only thing to be said with certainty is that his attempt to abolish them [the Handschu guidelines] is the [New York] Police Department's first power grab since the World Trade Center attack." In an attempt to legitimate his attack on Handschu, Kelly has foregrounded the role and opinions of the NYPD's new Deputy Commissioner for Intelligence, who is David Cohen, formerly of the Central Intelligence Agency. "The counter productive restrictions imposed on the NYPD by the Handschu Guidelines in this changed world [sic] hamper our efforts every day," Cohen stated in his brief submitted to Judge Haight. But who says that, since 11 September 2001, this world has changed?


(For more on the Handschu Consent Decree, check out this December 2002 article in the Village Voice.)