on the use of surveillance cameras 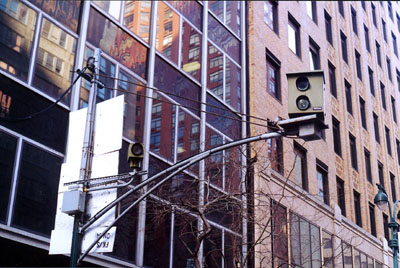 
All over America and England, and, no doubt, in a great many other countries all over the world, a growing number of local police departments have begun relying upon high-tech surveillance cameras to not only monitor traffic conditions and protect homeland security, but also to "catch" automobile drivers who drive too fast or go through red lights. (According to some estimates, defense contractor Lockheed Martin installed and operates approximately 80 percent of these cameras, and receives as much as 50 percent of each ticket as payment.)

One rarely hears or reads about strenuous opposition to the proliferation of these so-called traffic or red-light cameras, which are very popular among police officers and politicians, of course, but also among some self-avowed community activists. Nevertheless, traffic cameras should be opposed, and not simply because they enlarge even further the number and types of surveillance cameras that the police are being allowed to operate in public places (even though this is a very good reason indeed). Traffic cameras should also be opposed because --

1. These cameras do not simply photograph license plate numbers. They also capture ("search and seize") large quantities of visual information that is totally unrelated to the matter at hand (which car, owned by whom, did what, where and when). Namely: the face and thus the personal identity of the driver; the face(s) of the passenger(s), if any; the contents of unoccupied seats, especially if used to transport large objects; and the faces of pedestrians, bicyclists or motorists who were also within sight when the photograph was taken. All of this "excess" information is irrelevant and yet highly personal; it is certainly covered by Fourth Amendment protections. None of this excess information should be stored, used for any purposes whatsover or disclosed.

2. These cameras cannot be used to monitor the automotive behavior of people who drive motorcycles or motor bikes, neither of which bear upon them license plates large enough to be photographed, or motor scooters or bicycles, neither of which require license plates. Unless every single vehicle is both licensed and rendered fully transparent or "readable" to the mechanical eye, then such surveillance cameras cannot help but discriminate against some vehicles and favor others.

3. These cameras are very expensive. Most cost $60,000 each; some cost as much as $90,000 each. In New York City, there are already 150 traffic cameras in operation. That is to say, $9 million has already been spent on creating an infrastructure for the video surveillance of automobile traffic. It is obvious that the interests of the people of the City of New York would have been much better served if this money had been used to employ sufficient numbers of decently-paid police officers to monitor the circulation of traffic in New York City. (Nine million dollars translates into yearly salaries of $50,000 each for 180 police officers.)

4. The traffic engineers who install these cameras are all-too-frequently tempted to reduce the amount of time that the traffic light stays "yellow" before turning "red." Precisely because it will likely increase the number of drivers who run red lights, this alteration allows the surveillance system attached to the traffic light to catch more red-light runners, and thus generate more revenues for the state (see below). Unfortunately, indeed, tragically, altering the timing of the traffic light also causes more rear-end collisions, and thus more injuries to drivers and their passenegers.

5. These cameras result in A) the issuance of more tickets, and B) the issuance of tickets that -- unless one has access to an attorney -- are virtually impossible to contest in court. Unlike police officers, surveillance cameras don't get tired, fall asleep on the job, or even need to blink, rub or rest their eyes for a minute. Cameras will never be influenced by a motorist's race, gender and manner of dress, nor will they unionize, agitate for higher wages or call in sick or engage in work slow-downs if they don't get what they want. But surveillance cameras aren't infallible.

If the sensors upon which they depend are badly positioned or moved from their original positions, the integrity of the entire system is compromised. Quite obviously, only those with sufficient money to hire an attorney will be able to effectively contest the ticket that these automated systems dispense.

6. Unlike police officers, photographs or videotapes taken by surveillance cameras can be relied upon to attend each and every court date, to remember the exact time and place of the traffic violation, to positively identify the license plate number of the car that committed it, and to never change its testimony. And yet, the actual cameras that took the pictures cannot be brought before the court and asked to testify. As a result, the right to confront one's accuser (habeas corpus) is violated.

7. It seems very likely that the real reward for the increasing use of traffic cameras is not better safety on the streets, but higher revenues for the state. Though expensive to purchase, these traffic systems generate so many apparently uncontestable tickets so quickly that they (the systems) virtually pay for themselves in the first year of operation. After that, it's pure profit for the government. In October 2002, when the Mayor of Washington DC admitted that his city's traffic cameras produced "money and safety," the Automobile Association of America withdrew its support for them.

8. But the municipal authortites aren't the only ones getting rich off of these cameras: so is Automated Computer Systems (ACS), a subsidiary of the immense military contractor Lockheed-Martin. In Washington, DC, ACS receives 40 percent of the revenues brought in by its cameras systems. In the words of an April 2003 class action lawsuit against the District of Columbia, this fact "renders the [...] process impermissibly partial towards a verdict against automobile owners," and thereby violates their due process rights under the Fifth Amendment.

9. These cameras are already being used to justify reductions in the number of police officers assigned to patrol the highways and streets, and further reductions seem likely. But what we need isn't fewer cops equipped with increasingly sophisticated surveillance cameras and computerized databases. What we need are fewer cars, better mass transportation, and more human beings (in this case, police officers) who are from and integrated into the communities they are hired to serve and protect.