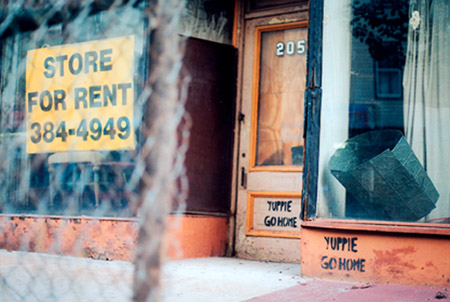 Graffiti has appeared around Bedford Avenue that proclaims YUPPIE GO HOME. While we sympathize with what we assume to be the author's (or authors') motivations for spray-painting this phrase in several locations in our rapidly gentrifying neighborhood, we must say that we don't believe that yuppies can be told to "go home" -- not because it is rude to do so, nor because they are already at home in Williamsburg -- but because Young, Upwardly-mobile Professionals have no home to go back to, no matter where they sleep and store their stuff. To be a yuppie is to be at home nowhere and to be a tourist everywhere.

Yuppies aspire to be members of the elite, to be among those super-privileged few who have real wealth and who hold real power, to rise to the top, to make it their home. But the top has become just as uninhabitable as the bottom. Everyone knows that it is impossible to continue to pretend that capitalist industrialization -- or digitization, its contemporary equivalent -- will slowly elevate everyone to the level of the elite. Industrialization has so thoroughly ravaged and poisoned the entire planet that everyone -- even the elite -- has been lowered to the level of common women and men. But this is not to say that common women and men have it pretty good these days, though most everyone seems to think so. We are all in the shit, and really fucking deep.

Everything that a real elite would love -- well-educated and stimulating conversation; good wine and food; beautiful, well-preserved old buildings, extensive libraries, and great works of art and literature -- all this is in fact fast disappearing everywhere and being replaced by inferior copies. Having $40 to spend on a single Cuban cigar is just not the same thing as having the power to prevent acid rain from irreparably damaging the soil in Cuba's tobacco fields. No one is immune to the effects of toxic pollutants in the air, water and soil. Though the members of the elite will have the money to treat their cancers, while everyone else will not, we will all die of cancer -- unless global capitalism is overthrown and replaced with a superior form of social organization.

No one denies that the once-remote suburbs now closely resemble the gritty cities more and more, or that the countryside is deteriorating everywhere. The wilderness? Where is that, exactly? Montana?! There is nowhere on Earth the members of the elite can go and enjoy their privileges in peace, quiet and good health. The entire planet is a becoming nightmare, not only for poor shits and sinners like you and me, but also for "saints" such as Lady Di, the Dead Princess of Wales.

Wherever you go, there is either incredible poverty, famine, and disease, or cell phones that irradiate the brain with deadly microwaves, "second homes" shabbily constructed by corrupt builders, automobiles stuck in traffic and spewing poisonous gases, and supermarkets well-stocked with frozen meats that need to be recalled and burned.

No one denies there is something ridiculous about all politicians, but especially those at the top. What child grows up wanting to be President some day? Though everyone wants to be as rich and powerful as Bill Gates, no one denies that the man is a social idiot, bereft of any culture whatsoever, not to mention a culture that a member of the real ruling class would deserve to have and enjoy.

And so -- YUPPIE GO HOME? No, impossible. YUPPIE OUT OF WILLIAMSBURG, maybe. REVOLUTION OR DEATH, even better -- that is, of course, if you really have to spraypaint a slogan about gentrification on buildings in the neighborhood.

[Here are the responses we have had to this intervention. And here we find a reprint of the text and more than a dozen responses to it.]