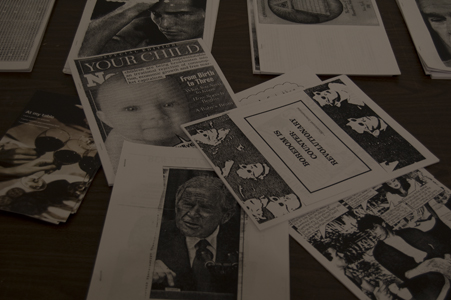 Between 17 November and 5 December 2008, the Reed Gallery at the University of Cincinnati (Ohio) hosted an exhibition of the work Bill Brown has done under the name "NOT BORED!" Curated by Bill himself, this exhibition not only included a copy of every issue of the zine he has published since July 1983 and reproductions of 70 of its most memorable illustrations, but also paintings "detourned" in the manner of Asger Jorn, photographs of the murals in the Chico Mendez community garden circa 1997, and several placards created for use by the Surveillance Camera Players, circa 1999. Set up as a classroom, the exhibition space was also the site of a performance given on the evening of Thursday, 20 November 2008.

Thanks to Aaron Walker, we are able to offer the following documentary photographs. (Larger versions are available on request.)

-- Classroom: view from the podium; view of the podium area.

-- Detourned Paintings: seen from a few steps back; I Am A Cliche; meta-painting.