"I can see the future" 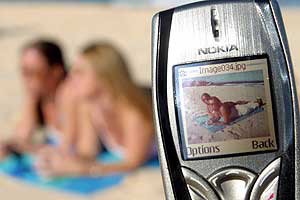 "My guess is that the real revolution in law enforcement capability will come from digital radios, rather than from video cameras." -- Arnold Kling, The Trackable Society, 21 October 2002.

Unlike the grainy pictures taken by today's picture phones, the Nokia Observation Camera snaps high-resolution images of 640 by 480 pixels. This means it rates as a surveillance system under British and European law, so people buying one will have to register with the data protection authorities as a CCTV user, says Britain's Office of the Information Commissioner. "If this device captures an identifiable image, it will be classed as a CCTV device," says the office's compliance manager Fay Spencer. "Anyone who is not exempt will have to register as a CCTV user." Under the act, anyone can ask a registered user to see what they have recorded. Watching your car in your drive or on the street outside your home would be exempt. But watching other people, their homes or cars would not. "The guiding principle is transparency and fairness, telling people how the camera is being used and why. That's why shops have notices warning customers that they are on camera," says Spencer. -- New Scientist, 19 May 2003.


1. In place of the video surveillance cameras currently installed on the exteriors of buildings, on city-owned poles and in other public places, the security industry will instead install cellular telephones ("digital radios"). Unlike video cameras, even those that are outfitted with wireless transmitters, so-called "cell-phones" are fully integrated, multi-purpose devices. They can be outfitted with tiny digital cameras that can take high-quality stills or moving pictures, can be controlled by remote units, and can use microwaves to transmit images to far-away locations almost immediately after taking them.

2. All cell-phones will come with two types of built-in surveillance/tracking devices: transponders that communicate with the US military's semi-commercialized system of Global Positioning Satellites (GPS); and radio frequency identification (RFID) tags. These devices will allow both the military government and the private sector to identify the precise location and track the exact movements of each and every cell-phone user, no matter where they go.

3. Cell-phone users will be actively encouraged to play detective and use their cute little cell-phones to surreptiously take pictures of people who look "suspicious" and then send these pictures to the local police and/or the FBI, who will use computers running face recognition software to see if they match any of the pictures that are stored in their huge and always-growing databases. Winners in this game of snitch will be financially rewarded and turned into "heroes" by the media (see #5 below).

4. Sexually repressed and ethically corrupt people -- American males -- will use their cell-phones to take "up the skirt" shots et al of girls and women who don't know their privacy is being violated and in such a despicable fashion. This "video rape" will quickly become a real problem, much worse than it is now: cell-phones already take better pictures than most video cameras; cell-phones get rid of the evidence (sent it somewhere else), rather than storing it where it can easily be found; unlike video cameras, cell-phones don't require disguises or excuses to be brought into such sensitive areas as schools, gyms, locker rooms, bathrooms, beaches, etc etc.

5. Reality TV shows a la Big Brother will accentuate the "novelty" of having a group of people cooped up together in a single place for a long time and watched by hidden cell-phones, not hidden video cameras.

6. As cell-phones become increasingly relied upon to provide a wide range of services (telephone calls, text-messenging, pictures, video games, Internet connection, personal digital assistance, etc.), they will become increasingly attractive to thieves, who will see the value of both the device itself and the information (the "identity") contained within. To guard against both kinds of theft, all cell-phone users will have to prove that they are indeed who they say they are (the rightful owners) before they can use their own phones.

7. The most popular method of authentication ("logging on") won't be typing in a 7-digit password (hard to remember) or placing a digit on a device that can read and remember fingerprints (too reminiscent of what the police do to bad people when they arrest them); no, it will be letting the cute little cell-phone take a picture. This picture (of the user's face or eyeballs) will be analyzed by the cell-phone's face recognition program, which either won't find a match ("Please try again") or will find a match and only then allow access ("You've got mail!").

8. It's possible that a user who fails to log on after 3 tries may find that his or her service has been temporarily suspended while the service provider tries to "determine the nature of the problem." Is it incompetence on the part of an legitimate user, or the result of deliberate actions by an illegitimate user? Because "an illegitimate user" might be a criminal (thief) or a terrorist (Osama Bin Laden, Saddam Hussein or someone else on the Bush Administration's "missing persons" list), every single attempt to log-on to a cell-phone will -- using the very same system described in #3 (above) -- be "monitored" by Verizon/AOL-Time Warner/the FBI/theCIA.

9. The Israeli Defense Forces have already shown that alleged terrorists -- whether they are legitimately using their own cell-phones or are using others' phones illegitimately -- can be assassinated from a safe, far-away distance by helicopters, which place calls to the alleged terrorists' private telephone numbers and then fire air-to-ground missiles at the locations provided by the alleged terrorists' very own cell-phones, that is, if they are unlucky enough to answer or "pick up." It's only a matter of time before the same system is used by the United States government, which has already used Uninhabited Aerial Vehicles to summarily execute suspected "terrorists" in Yemen from a safe, far-away distance.