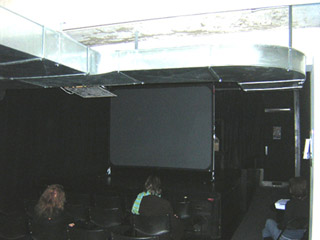 It was an almost-complete disaster. Only 10 people came to a place that could accommodate 70 people; and they came, not all at once, but dispersed over a nine-hour-long period (5 pm to 2 am). We, the sponsors of the event, got soaked: we expended more than $500, and recouped only $100. Quite a potlatch, eh?

Consider, if you will, the following: 1) the name "Guy Debord" is pretty well-known, especially (only?) in New York City, which is the home of such situ-sympathetic publications/publishing houses as October, Verso, and Autonomedia; 2) three of the six films being screened had never been screened outside of France, where they had only been screened a few times, and the remaining three films had only circulated as bootlegged videotapes; 3) the event was held on 42d Street in Manhattan (very easy to get to); 4) it was listed in Time Out New York, which is the best and perhaps the most-often-used weekly guide to events in New York City, though the preview itself was idiotic and error-ridden:

The midtown theater [Chashama] presents all six films directed by France's radical leader of the Situationists, prophets of the global impact of advertising and the commodification of everyday life. Starting Sun 5pm with 1952's Howlings in Favor of de Sade (which no doubt involves howls, Sade and some kind of narration), and extending through the rest of the evening with Debord's definitive The Society of the Spectacle (1973) and four other works, it's an event for those who like to wear their thinking caps. Also bring your command of the French language; none of the these prints have English subtitles. Chashama will be providing translated synopses to help you get, erm, situationed. (Time Out New York, 2-6 March 2006, p. 102).

5) the screening was announced two months in advance; 6) the press release was sent, as either an email or a snail-mail or both, to The Village Voice, to "radical" professors at NYU, the Graduate Center at CCNY, Columbia University and Princeton University, and to a variety of "independent" on-line news sources; and -- last but not least -- 7) the press release somehow came to the attention of "Alice Debord" (also known as Alice Becker-Ho, Guy's widow, heiress and executrix) or, rather, we received an email from the Intertalent Agency that claimed that Alice Debord had learned of the event and, presumably on her behalf, wanted to know who, if anyone, had granted us the rights to exhibit Guy Debord's films (or, rather, Gaumont's three-disk DVD set, released in France November 2005).

All of this boded well, very well, it seemed, for the Guy Debord Film Retrospective at Chashama, 217 East 42d Street, on Sunday 5 March 2006, the 22d anniversary of the assassination of Gerard Lebovici. 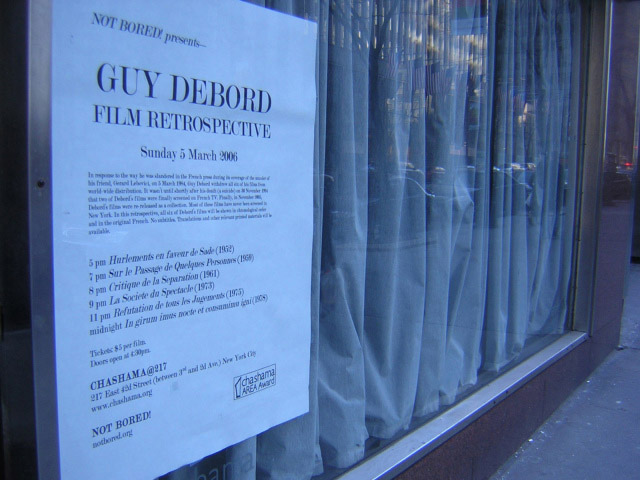 What happened with Intertalent, you ask? We responded quite simply that we had not secured any rights from anyone, which triggered the following email on 6 February 2006 from a Julien Messenmackers:

"You make money with Guy DEBORD's work but please don't call you situationist or something like this, better small traders. Poor guys of you . . . So long disneyland's sad clowns!"

Yeah, whatever, buddy: you've realized that you don't have the authority to order a cease-and-desist letter or that doing so wouldn't be worth the time and trouble. And so we are free to do what we want with the DVDs we bought. By the way: when you want to insult an American, but especially a New Yorker, you must use one of the following words, but especially the last one: asshole, bitch, doody-head and/or short-dicked motherfucker.

We dreamed of 400 people coming to the screening, prepared for 100, would have settled for 70, never expected less than 30. That day, we attempted to create an atmosphere: romantic scented candles; good music (Argentinian tangos, lettrist sound-poetry, Miles, Erik Satie, African Juju and PiL); fresh water, lemons, good wine (red and white, both Australian) and liquor (tequila and scotch whiskey); and programmes, translations, and other relevant texts. Kava was at the door; Bill cued and played the DVDs; Lisa came to volunteer, but wasn't really needed. Like the others, she saw a couple of the films, enjoyed the absurdity of the event itself, and left after a while.

There was, of course, a blogger in attendance: one Andrew Potter. His commentary for 7 March 2006 was typical of bloggers (the "meme" is me me me), but caught something worth reporting, nevertheless:

"New York is the most populous city in the United States. The Debord screening was advertised in Time Out. I don't even want to think about what it says about me that I was one of five people in the city who thought this worth attending."

Something is exhausted: either it's the New York pro-situationist milieu; or the interest among the movie-going public (mainstream and/or underground) in the very obscure films of Guy Debord and/or (French) avant-garde films in general; or it's NOT BORED!'s reputation for putting on a good show. Could it really be that people who would "normally" have come to such an event were distracted/diverted by the Academy Awards, that is to say, by its host, cute lil' Jon Stewart, who was on TeeVee that very night?