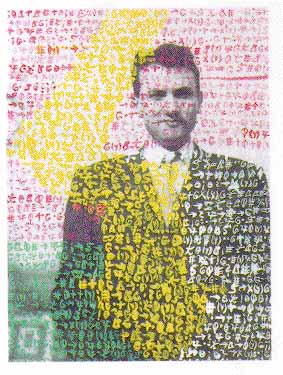 BIO: born Isidore Goldstein in Botosani, Romania, on 29 January 1925. He moved to Paris on 23 August 1945, after the liberation of the city from Nazi occupation. Shortly thereafter, he meets Gabriel Pomerand (another Jewish refugee), and founds "lettrisme." The first public manifestation of the new artistic movement takes plaves on 8 January 1946 at the Societes Savantes, where Isou reads his poems aloud. The next year, Gallimard publishes his Introduction to a New Poetry and a New Music, which contains "Manifesto of Lettrist Poetry." He would eventually publish over 200 books, containing his "hypergraphic" writings, "metagraphic" images, plays, theoretical writings, polemics, wall posters, etc. In 1950, the Lettrist group also included Maurice Lemaitre, Jean-Louis Brau, Gil J Wolman, and Francois Dufrene; in 1951, Guy Debord would join. Despite the formation of the Lettrist International in 1952, Isou's lettrist group would continue through the rest of the decade. He died in Paris on 28 July 2007.