Statement: There are 78 police cameras in the downtown of Vilnius, Lithuania. There is no law that would regulate the usage and installation of these systems. And there are no warning signs for the public. A couple of weeks ago we displayed symbolic signs in the main streets of Vilnius.

We're just a bunch of inline skaters and we used to skate in one of the central squares in Vilnius when this spring the mayor announced that he planned to ban skating in the centre of Vilnius. Some police commissionaire backed him up by saying that police intended to use the city's CCTV surveillance system to track and fine all skaters that would try to skate in the downtown area. When we heard about that it was a bit creepy - we are just a bunch of people after all who thought there was nothing wrong with skating in the central square and now they said they would use all those expensive cameras to monitor our activities. Then we decided it was a good opportunity to take a deeper look at why and how this system is being used, whether there is some effect on crime rates, safety perception. etc. It turned one there were no laws regulating the usage of vidoe cameras monitoring public spaces. That's why one day we displayed symbolic signs (i.e. Big Brother is watching you; Policeman of the 21th Century, Angel the Guardian, etc.) that warned people about proliferation of video cameras in our everyday life.

The first performance by the Lithuania Surveillance Camera Players took place during the evening of Sunday 17 June 2001. Staged direclty in front of the offices of Lietuvos Rytas, this performance was a 100% success -- some surprised person emerged from the office and gave us the usual bullshit about "private property," not taking photographs of their building, etc. etc. After a successful negotiation, the security guard "retreated," and even allowed our posters to remain on the office's wall until the next morning!

As part of its performance, the Lithuania SCP handed out flyers and sent the following e-mail to Lietuvos Rytas.

This is a letter from Red Brigadez, a Lithuanian anarchist group. Earlier today, we used your surveillance cameras to spread information in a new way. Using the same means, we will in the near future inform the mass media of our existence, attitudes and opinions.

Red Brigadez and the Lithuania SCP are part of a world-wide movement. To learn more about it, visit SCP.

As part of our performance, we displayed a series of messages, which are reproduced here in case your security team didn't record them: 1. Red Brigadez reminds you. . . . 2. Don't forget to change the videotape! 3. You might miss something important! 4. Red Brigadez & the Lithuania SCP. 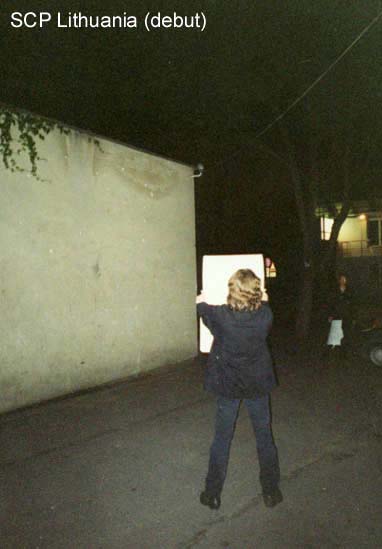