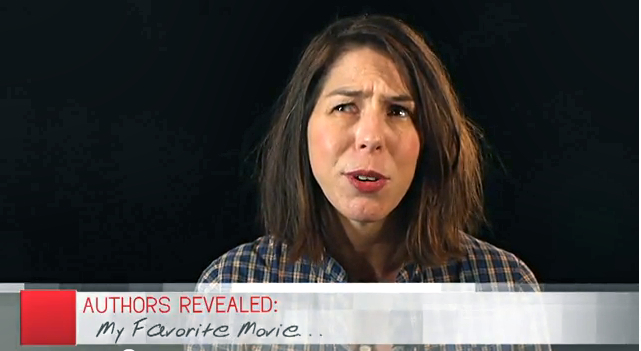 Film is such an important part of my life that, um, it’s hard to chose just one favorite film, um, maybe I would reframe and say a movie I’m thinking about a lot right now is by the French filmmaker, artist and kind of provocateur, ah, Guy Debord. He made a film in 1978. It was his last film and it’s called In girum imus nocte consumimur igni, which is a Latin palindrome that means “we turn in the night in a circle of fire,” and um, I’m very, uh, I’m – I find the title totally magnetic and amazing, and the film itself, um, is his very best film. It’s an incredible film. It includes, um, a lot of found footage that he edits together, interspersed with footage that he shot riding around in a vaporetto in the Venice canals, and the film offsets themes of water with themes of fire, and water is time and the wisdom of time, and fire is the bursting of change and by that he really means revolutionary change, and so it’s this idea of fire and water, and change and stasis, and at the end of the film he says that water always puts out the fire of change and, um, it’s a very rich film and its full of various thematic elements that I’m in the process of, uh, grand theft for my next novel.

In only one minute and fifty seconds, Rachel Kushner (speaking in a video uploaded on 30 July 2009 by her publisher, Simon & Schuster, which also has placed it on the page that advertizes her latest novel) racks up an impressive number of mistakes about Guy Debord and his film In girum imus nocte et consumimur igni. She gets the title wrong in both languages: she drops the word “et” out of the Latin; and she mistranslates the phrase into English (it actually means “we turn round in the night and are consumed by fire”: she imagines people turning around a fire instead of being consumed by it!). The footage that was not shot by Debord himself was not “found footage,” which implies snippets from generic or non-artistic works, but extended excerpts from famous films that he specifically requested. (If fact, not all the footage he requested could be obtained.) Finally, it is true that (1) there are shots of flowing waters and raging fires in the film, and (2) Debord himself – in a note written on 22 December 1977– did say the following:

All of the film (with the help of the images, but also in the text of the “commentary”) is built on the theme of water. Thus, one cites in it the poets of the flow of everything (Li Po, Omar Khayyam, Heraclitus, Bossuet, Shelley?), who all have spoken of water: it is time.

Secondarily, there is the theme of fire: the flash of the instant: it is the revolution, Saint-Germain-des-Pres, youth, love, negation in the night, the Devil, the battles and the “uncompleted enterprises” in which men go to die, dazzled as “voyagers who pass”; and the desire in this night of the world (“nocte consumimur igni”).

But the water of pent-up time carries away the fire and extinguishes it. Thus, the brilliant youth of Saint-Germaine-des-Pres, the fire of the assault of the burning “Light Brigade” that drowned in the coursing water of the century when it advanced “under the cannon of time”. . . .

But this note was only one of several descriptions that Debord made of his film, which is certainly not a metaphysical or merely “poetic” work. In the words of a letter to Gerard Lebovici (the film’s producer) dated 21 July 1977, Debord called In girum “a veritable outrage to the public, and perhaps the only one that it has lacked so far, despite deserving it.” What kind of outrage? In an undated note that was never published during Debord’s lifetime, but, like the one relied upon by Ms. Kushner, was included in the documentation that accompanied the 2005 release of all six of his films as a boxed set of DVDs, he writes that In girum must have, “especially if it is rather ‘lyrical-subjective,’”

a very violently critical-political side (very subversive, shocking). For example: on the horror of current society, its shameful poverty (living conditions, food, illusions and neuroses), on the executives, their declarations, their thought (something like “On the Poverty of the Executive Milieu,” in the genre of the notes by Alice [Becker-Ho] . . .).

The passage can be this: how the time that passes has led us to another world: the “good” and “bad” of this:

1) the good: I transmit to my epoch the malady of subversion

2) the bad: how this world is disfigured (giving this as reason for our critique)

For example, to show: this is no longer a question of aesthetics.

The experts critique or reassure.

But their illusions: what they accept, believe, love. . . .

The spectators (proletarians in this, but ashamed) don't even have a past.

This note allows us to see how much escapes shallow and placid Ms. Kushner, for whom In girum is (and only is) “a question of aesthetics”: the heated and implacable condemnation of both this society and people (“experts”) such as Ms. Kushner herself; the insistence on and joy taken in the fact that “the fire” always returns; and the hope that, one day, a “fire” will break out that will be so hot and extensive that no amount of water will ever be able to extinguish it.

And so a question arises. Why do people like Ms. Kushner claim to “accept, believe [and] love” Debord’s works, despite his explicit hatred of them? The answer is simple: because there is no one to dissuade them from doing so. Debord himself is dead; his widow has done everything she can to encourage people such as Ms. Kushner to say whatever they like; and his former friends refuse to speak up in his defense. And so it falls to people such as ourselves – who never knew Debord nor aspire to be famous authors, and so have nothing to gain or lose by speaking up – to denounce those who would “turn” him (a revolutionary) into a mere filmmaker, artist and provocateur.