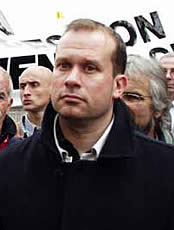 BIO: Born in Algiers in 1950. His father, a watchmaker and jeweler, was a Communist militant. In 1962, his family relocated to Paris. Emancipated at 16, he participated in the Anarchist Congress at Bordeaux in 1967 and later enrolled at the University of Nanterre, where he became a member of a group called the Enrages. Very active in the events of 22 March 1968, he was elected the president of the Occupation Committee of the Sorbonne on 14 May 1968. In June 1968, he became a member of the Situationist International, to which he belonged until 1971, when he was excluded. In the 1970s, he left Paris for the country and eventually became a sheep-farmer. In 1991, he joined the Peasant Confederation, through which he eventually met Jose Bove. In 1996, he became aware of genetically modified organisms, against which he helped organized attackd in 1998 and 1999. In 2003, he served a term in prison for his actions.


Texts in translation
Propositions for the organization of our future meetings, 26 August 1969
Preliminaries on Councils and Councilist Organization, Internationale Situationniste #12, September 1969
To the French Section of the SI, for discussion March-April 1970
Concerning the first texts of the discussion, the debates of 17 March, 7 April, and 14 April, and other questions of importance, 18 April 1970
Notes for the meeting of 12 May 1970, May 1970
Declaration before the Tribunal of Agen, 3 February 1998
Letter to Jose Bove, 3 September 1999
Letter to Jose Bove, 2 November 1999
Biotechnology: Public and Private, L'Ecologiste, #1, Autumn 2000
Interviewed by "Liberation," 3-4 February 2001
Open letter concerning vaccine propaganda, 3 October 2009
Above the Volcano, 5 November 2014