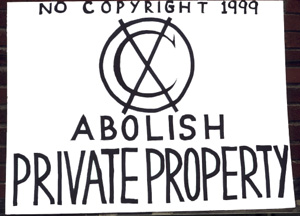 The Surveillance Camera Players (SCP) are opposed to all forms of property ownership, be they physical or intellectual property rights.

The SCP therefore try to act as unconstrained as possible by the laws against infringement of copyrights and trademarks.

The SCP have never asked for nor have they ever received the grant of rights necessary to perform, adapt or re-publish Alfred Jarry's Ubu Roi, Edgar Allan Poe's "The Raven," Samuel Beckett's Waiting for Godot, or George Orwell's 1984.

Conversely, the SCP do not claim any copyrights or trademarks on their adaptations or their original scripts, on their accounts of their performances, on their position papers and press releases, or on the photographs, audio recordings and video excerpts that appear on this website.

Any and all of these materials may be quoted, re-printed, excerpted, adapted or modified, even without mentioning the source, at will.