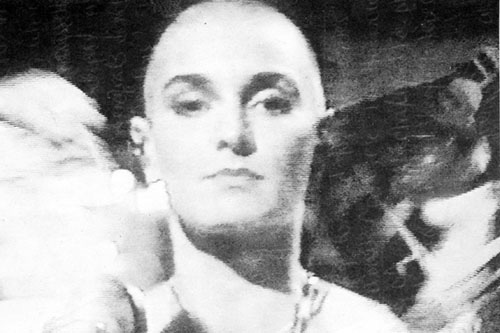 On 3 October 1992, the Irish rock singer Sinead O'Connor was the musical guest on Saturday Night Live. For her first song, Sinead performed the title track from her most recent album, Am I Not Your Girl? with a full backing band. For her second, she went with "War," a song by Bob Marley that had once been banned for its apparent advocacy of violence. In a very risky move, musically speaking, Sinead performed the song a capella. Dressed all in white, surrounded by candles and (as usual) shaven-headed, she was a riveting sight. With NBC-TV's cameras focused in-tight on her, Sinead ended her "War" by crying for another one to begin. "Fight the real enemy!" she called, and, out of nowhere, produced a copy of a photograph of Pope John Paul II, which she ripped into pieces. There was stunned silence, and then the station went to a commercial.

The NBC switchboard was immediately inundated by complaints (supposedly 4,484 in all) called in by outraged viewers. Denunciations of Sinead's "blasphemy" poured forth from all kinds of religious figures and celebrities, including Frank Sinatra, who was quoted as saying he wanted to "punch" the singer "right in the mouth." NBC was supposedly fined $2.5 million dollars by the Federal Communications Commission (FCC), which had never before fined the network for content aired on Saturday Night Live.

In the meantime, Sinead herself said nothing about what she'd done or why she'd done it. (Simply changing one of Marley's lines so that it referred to "sexual abuse" instead of "racial injustice," as Sinead had done in mid-song, hadn't been sufficient explanation and so the press was filled with lurid denunciations of her.) When she returned to the United States on 16 October 1992 to perform at a birthday concert for Bob Dylan at Madison Square Garden in New York, Sinead was greeted by a weird mixture of cheers and boos. Despite the severely divided response to her presence, she once again sang an a cappella version of "War." Once she was done, she staggered offstage, where she was comforted by Kris Kristofferson. Shortly thereafter, Sinead O'Connor permanently retired from the "pop" entertainment industry.

Eventually, Sinead O'Connor made her peace with the Pope. On 22 September 1997, in an interview with the Italian weekly newspaper Vita, she asked the Holy Father to forgive her. She claimed that her attack on the photo had been "a ridiculous act, the gesture of a girl rebel," which she did "because I was in rebellion against the faith, but I was still within the faith." Quoting St. Augustine, she went on to add, "Anger is the first step towards courage." Another courageous step Sinead took in the late 1990s was to join the congregation of the controversial Irish Bishop Michael Cox, who eventually ordained Sinead as a priest. Lacking a sense of humor, the Vatican has refused to recognize Sinead's membership in the priesthood, which the Pope considers "bizarre." This is a case of the pot calling the kettle black, but the Pope is right: Sinead's story is a bizarre one.

And NBC? In the informative and relatively even-handed biography of the singer that airs on VH1 as part of the cable TV station's on-going "Behind the Music" series, it's said that, "even to this day," NBC refuses to allow the photo-ripping scene to be re-broadcast by anyone. VH1 itself had to settle with a blurry shot of Sinead in mid-rip that was published by one of New York's tabloid newspapers. You can catch a glimpse, but you can't actually see what Sinead did that night in 1992: you can only hear about it, thanks to the Vatican's clout and NBC's cowardice.

This would seem a good point to talk about censorship. But it isn't -- not yet.

The Comedy Channel shows back episodes of Saturday Night Live several times a day. In early August 2001, I happened to see the episode in which Sinead O'Connor is the musical guest. Everything goes as it should -- dressed all in white, Sinead performs "War" a capella as her second number -- until the end of the song. There is no war cry, no identification of "the real enemy." Sinead doesn't hold up a picture of the Pope, but a picture of a cute little black boy, instead. And then the song is over, and Sinead stands, smiling, holding the picture behind her back, as the crowd applauds and cheers.

It took a while for it to sink in that NBC hadn't simply blacked out or removed the photo-ripping scene. Instead, NBC had gone beyond mere censorship and either had replaced the Pope-ripping sequence with another one (the song as it was performed in rehearsal?) or had digitally altered the broadcast so that there was apparently nothing in "the original" to black out or remove in the first place. Why would anyone want to block or cut out Sinead's impassioned plea for the children? In times of war, don't we tend to forget about the children, especially the cute little black ones? Nice bullshit, but it wasn't Sinead's.

Like the authors of textbooks on Soviet history, who had to keep changing the past so that it would conform with Stalin's latest purges, NBC has created its own Sinead O'Connor and is now passing her off as the original.


(A video of Sinead singing "War" and ripping up a picture of the Pope used to be and is no longer available on You Tube.)