A hoax concerning video surveillance questions the people of Dijon

The mayor duped by a masked detractor 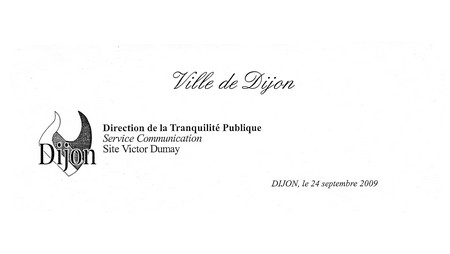 At the end of last month (24 September 2009), the inhabitants of the city's center received a strange letter[1] emanating from the "Administration of Public Tranquility." The object of the missive: to inform the residents of the installation of video surveillance cameras. . . . If the form is very administrative, its basis is truly questionable. And for good reason: it wasn't the Mayor or any members of his administration who wrote it, but clearly someone opposed to the system.


The True Story of Georges Smith

In this letter received by the residents of the city center, nothing suggested that it was actually a fake. Absolutely everything had been thought of so that the people of Dijons would fall for it. The presentation is, in fact, a copy of a 100% official paper: the town's logo, the very administrative page lay-out, the serious tone and even the signature of the addressee, a certain Georges Smith. . . . Upon telephoning the number indicated at the bottom of the letter, one encountered a real Administration of Public Tranquility: "And I can tell you that my name is not Georges Smith," said an employee who desired to remain anonymous. Apparently, the town's authorities have been informed. "You are not the first to call us; at least a dozen people have already called us for reassurance that it is in fact a fake."

To surveill "your every move"

Looking carefully, the fakery is flagrant. "The logo is made up of Mephistophelian horns, and then there is a crude orthographical mistake in "Tranquility," as the employee noted. As for the content, there is hardly any doubt that the Mayor is not the author. . . . Selected morsels: "You are not unaware that the municipality we desire will henceforth privilege the most modern means of repression, rather than the social-equality measures that have become too costly, complex and archaic [...] Henceforth, your every move (and those of the people who visit you) will be videotaped constantly."

A fake worth a year in prison

"We don't know who is behind this," the employee affirms. "But the town's judicial system reserves the right to open a legal inquiry." A usurpation of [public] function such as this one falls under Article 433.13 of the Penal Code, which mandates a year in prison and a fine of 15,000 euros for anyone who contravenes its provisions. "In any case, what this person has done is very clever," adds the authentic but anonymous employee of the Administration of Public Tranquility. "I am certain that, before the court, this person will defend himself by affirming that it is impossible for a real administrative document to be in error."

At least he isn't in fact the famous Georges Smith. . . . "The truth is out there," a person in a celebrated Science-Fiction series had the habit of saying.


[1] Translator's note: a similar letter was circulated in Lyon in 2008. It proclaimed:

In the framework of setting up EDVIRSP (Documentary Exploitation and Valorization of the Information Relative to Public Security), formerly known as EDVIGE, instituted by decree on 29 September 2008, the Commissariat of the First Arrondissement will be inventorying the people who live in Lyon. This census will take place in three stages: from the 16th to the 23rd of October 2008; from the 24th to the 31st of October 2008, and finally from the 1st to the 8th of November 2008. Everyone living in Lyon will be affected.

At the time of your appearance at the Commissariat within the framework of this census that relates to public safety, a Divisional Commissioner will determine with you if a short interview will be necessary to record the information concerning you.

People whose individual or collective activities indicate that they could harm public safety, as well as those who make administrative inquiries (applying for jobs in public administration), will have have their personal information recorded.

For the people concerned, the following will be entered into the database: photographs, civil status, profession, address, telephone number, email address, vehicle registrations and judicial records, as well as -- to the extent that the individual belongs to one of the two categories mentioned above -- their racial or ethnic origins, political opinions and/or union membership.

Your home is situated in the sector affected by the first phase (from the 16th to the 23rd of October 2008). Thus, you are invited to appear within the next week at the Commissariat of the First Arrondissement, 5 place Sathonay, 69001 Lyon, during office hours.

We thank you for your participation in this national inventory campaign that relates to public safety.