the Deception of Strategy 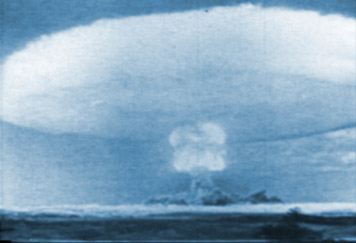 "We want them [the Iraqis] to quit, not to fight, so that you have this simultaneous effect, rather like the nuclear weapons at Hiroshima, not taking days or weeks but minutes." -- Harlan Ullman, creator of the "Shock and Awe" tactic, January 2003.

"As we move toward a new Middle East, over the years and, I think, over the decades to come . . . we will make a lot of people very nervous. We want you [Egyptian President Hosni Mubarak and the leaders of Saudi Arabia] nervous. We want you to realize now, for the fourth time in a hundred years, this country and its allies are on the march and that we are on the side of those whom you -- the Mubaraks, the Saudi Royal family -- most fear: We're on the side of your own people." -- ex-CIA Director James Woolsey, 3 April 2003.

Today, 25 June 2004, just five days before the US military is scheduled to "hand over" political control of Iraq to a provisional governing body, it became official: the Bush Administration has lost the support of the American people for its "humanitarian" war against Saddam Hussein. A public opinion poll conducted by CNN-USA Today-Gallup has found that a majority (54 percent) of the 1,005 Americans who responded think that going to war in the first place (no matter what the justification) was a mistake; they are increasingly disappointed with the results, which are appalling and grow worse every day. They are also increasingly disillusioned with George W. Bush, whose disapproval ratings are higher than they have ever been.

This is the Bush Administration's second major military campaign that has produced "mixed" results, that is, a rapid and deceptively easy military victory followed by a humiliating political defeat. The first one, of course, was the phony "victory" over the Taliban, which, though swift, failed to capture or kill Osama Bin Laden, didn't so much weaken Al Qaeda as force it to become more decentralized, mobile and willing to work with other, more "localized" jihadist groups, destabilized Afghanistan, and put new pressure on Pakistan. The entire post-September 11th global war on terrorism (GWOT) has been a disaster -- at least from the political or strategic standpoint. The total number of Al Qaeda-like terrorist attacks since "911" has risen and spread to previously unaffected countries, most notably Spain and Saudi Arabia. The GWOT has also, of course, been a resounding success from a certain, rather limited economic standpoint, i.e., billion-dollar, no-bid, "cost-plus" contracts with Halliburton, Kellogg Brown & Root, and other politically well-connected companies.

George W. Bush and the "chickenhawks" in his Administration have no monopoly on "mixed" (disastrous) military campaigns. The Clinton Administration conducted at least two of them: the 1998 Cruise missile attacks on Osama Bin Laden's positions in Afghanistan and the Sudan; and the phony 1999 "victory" over Slobodan Milosowic in Kosovo. And George Bush Senior conducted at least two of them, as well: the Gulf War of 1991, which left Saddan Hussein in power and thus created the precondition/justification for the second war against Iraq; and the 1992 "humanitarian" intervention in Somalia, for which Bill Clinton ended up taking the blame. The last time America conducted a truly successful military offensive, or at least one that didn't leave the defeated country in the midst or on the verge of a bloody civil war, was in 1988, when Reagan ordered the US military to invade Panama and arrest Manuel Noriega. But, like Reagan's invasion of Grenada, this "victory" held no strategic significance whatsoever.

Two themes emerge here: a long history of increasingly humiliating political defeats, which may be said to have started when the US military, despite its nuclear arsenal and superior air force, lost the war against Vietnam; and an increasing infantilization of the American presidency. The step from Reagan to Bush Senior was a step down, from Grandfather to Father; and the step from Bush Senior to Clinton/Bush Junior was literally a step from Father to Son. But this change isn't merely a decrease in age. Unlike Reagan, each one of these clowns (Bush Senior, Clinton and Bush Junior) experienced some sort of memorable public humiliation during their terms as President (throwing up while at a official dinner in Japan, denying an affair with Monica Lewinsky, and failing to win the popular vote count, respectively). Ever since 1988, there's been the increasing suspicion that these guys just aren't the real people in control of the US military. Instead, the US military seems to be in control of them.

Over these same 16 years, there has been a self-avowed "revolution in military affairs," that is, a rapid, technology-fueled but incomplete movement away from ground wars, troop-heavy deployments, mechanized divisions and an essentially defensive posture (a la NATO), and towards aero-space or "star" wars, precision-guided munitions, "special" and covert operations, and an offensive or "pre-emptive" posture (the so-called Rumsfield Doctrine). The idea is that one no longer defeats an enemy by attacking it on the ground, but by attacking from the air with increasingly lethal weapons. Because there will be far more deaths among the civilian population than among the armed forces, one must also be skilled at "relating" to the mass media, controlling "spin," deploying decoys, creating distractions, and circulating disinformation.

Paul Virilio's Strategie de la Deception is one of the few books that addresses itself to all of these developments. Originally published in 1999, it is made up of four newspaper articles Virilio wrote during and immediately after the Kosovo War. In 2000, Verso published a translation by Chris Turner under the title Strategy of Deception. Despite September 11th, which is the "gulf" that supposedly separates us from the world as it was back in 1999, Strategy of Deception retains its relevance. Indeed, it may even be much more relevant today than it was five years ago.

In a "Translator's Note," the entirety of which is quoted below, Chris Turner explains why Strategy of Deception is a "disappointing" rendering of the book's title into English.

It is always disappointing to report something lost in translation. In this case, the element lost is that of disappointment itself, for this is, of course, the everyday meaning of the French word 'la deception.' The term does, however, also have a more recondite military sense, the deception of missiles being the overall process of the deflection of such weapons from their course (this part is, technically, their seduction) and their redirection to some other -- preferably harmless -- target. Virilio uses the term to refer to the bundle of techniques of decoying, distraction and disinformation which make up a classically 'deceptive' strategy in the English sense. However, in his title he is alluding also, and more directly, to the (possibly intended) disappointment and disillusionment which remains after the massive Allied military efforts in the former Yugoslavia, where, were we ninteenth-century speakers of English, we might contend (pace Jamie Shea [cf. James Mills, The History of British India, 1817]) that 'never was expectation more completely deceived.'

These meanings make Virilio's book different from others on "the subject." Note well that all of the authors cited in the massive bibliography entitled Deception in Warfare, which was compiled in 1996 by the Air University Library at Maxwell Air Force Base, Alabama, concentrate exclusively on decoys and distractions, and do not touch upon the other two meanings of "deception" at all. Same thing with authors on the subject of the deflection or interception of in-coming missiles. There is an extensive literature on such relevant subjects as the re-programmable "Tomahawk" Cruise Missile, "Patriot" Anti-Missile Launchers, and the National Missile Defense System, aka "Star Wars," but the various authors define the deflection/interception of missiles as a tactic, not a strategy, and their works have little or nothing to do with either disappointment or classic deception.

Virilio's basic point is that, despite or perhaps because of the spectacular "success" of Hiroshima, "when a single B 29 bomber and a single atom bomb put an end to the war in the Pacific," it is impossible to conduct a politically successful or "humanitarian" war if its ideology and strategy are based upon on the false premise that wars can be won using nothing but air power. Virilio points out that, "during the Cold War years, the development of 'intercontinental missiles' and control of satellite space for the guidance of high-precision missiles sadly caused us to forget that aero-spatial war goes hand in hand with extremes of destruction and the imperative need for an absolute weapon, whether it be an atomic or neutron device, or chemical/bateriological agents." Because this fact was forgotten, "or rather obscured by the illusion of Allied victory in Iraq [in 1991]," a "fatal error was [able] to arise during the Clinton presidency of an all-out multiplication of these 'automatic strikes,' aimed at punishing so-called 'rogue states,' from which the USA aspires to protect the world by way of its telematic technologies." That "fatal error" continues to be made under Bush Junior: for both him and Bill Clinton, Iraq and Afghanistan were "rogue states" that richly deserved and would benefit frompunitive bombings from the sky. Both presidents were quite wrong, and in both cases.[1]

Thus a question arises: In whose interest works the strategy of deceiving infantilized American Presidents so that they once again make the fatal error of relying exclusively upon air power? The answer seems relatively-straight forward: the faction of the military-industrial complex that concentrates on nuclear weaponry and delivery systems, the "nuclear priesthood," the true believers in "mini-nukes." But, like many of his other books, Virilio's Strategy of Deception isn't a long, systematic or comprehensive effort. Instead, it is short, fast and full of lightning flashes, puns and coinages. As a result, even though he's the one who has managed to pose the question "Who profits from the strategy of deception?" Virilio doesn't give his answer the attention that it obviously deserves.


[1] Note added 17 June 2007: In a famous passage in The Art of War, Sun Tzu remarks that "The Way of War is a Way of Decption." That is to say, the general "changes his ways and alters his plans to keep the enemy in ignorance. He shifts camp. He shifts camp and takes roundabout routes to keep the enemy in the dark." But Sun Tzu also remarks that the general "must be able to keep his own troops in ignorance, to deceive their eyes and their ears" (emphasis added).