the sky has eyes


There are approximately 120 private companies in the world that operate about a third of the thousands of small, orbiting, uninhabited space vehicles commonly known as satellites; none of these companies are American. In the USA, the only entities that are allowed to own and operate satellites -- even if they are used to do scientific research, or to provide commercial services relating to communications, entertainment or weather forcecasting -- is the Department of Defense (DOD) or one of the USA's independent intelligence-gathering agencies: the Central Intelligence Agency (created in 1947), the National Security Agency (1952), the National Reconnaissance Organization (1960), or the National Imagery and Mapping Organization (1996). Foreign governments, private companies and scientific institutions must either pay a fee or enter into an exclusive information-sharing agreement (or both) if they want to get access to America's satellites.

In the other countries that have placed satellites in orbit (Russia, China, France, Japan, India, Canada and Israel), the military/intelligence satellites (if any) are kept separate from the commercial ones, and private companies can operate their own satellite systems. This makes sense from an operational point of view. With some exceptions, military satellites are designed to move in complex elliptical orbits around the earth, so that they can photograph very large areas of the surface (whole continents) and determine the locations of sources of certain microwave transmissions. Commercial satellites, by contrast, are "geo-stationary," that is, designed to stay "motionless" in orbit above or, rather, in between certain (limited or very specific) locations that can't be connected with cables (see diagram below).

The US military makes extensive use of both kinds of satellites. As might be expected, geo-stationary satellites are used to produce very detailed radar images or photographs of small, strategically important locations, and to gather signals intelligence about or intercept and eavesdrop upon certain transmissions. But the DOD also uses geo-stationary satellites to direct precision-guided weapons to their locations. The satellites do this by directing down to the surface a laser beam that can be detected, locked on to and then followed all the way down by bombs or missiles that have laser-readers installed in their cones. And so, these satellites aren't fully automated killers, unlike their "cousins," the the uninhabited aerial vehicles. But they're close, and will get even closer if self-avowed President George W. Bush succeeds in his effort to revive Ronald Reagan's "Star Wars" missile defense plan from the 1980s.

It is highly instructive that the very first American satellite was a "reconnaissance" (spy) satellite and that it was the product of an intense, behind-the-scenes competition between the DOD and the CIA, which are still in competition with each other. (Note the battle to see who will achieve "Total Information Awareness" first.) On February 7, 1958 -- three years after the Air Force had begun work on a satellite that would provide continuous surveillance of "pre-selected areas of the earth" in order "to determine the status of a potential enemy's war-making capability," and one year after the Soviets launched Sputnik, thereby beating the Americans into space -- President Dwight Eisenhower turned to the CIA and asked it to develop a reconnaissance satellite of its own. Unlike the Air Force's satellite program, which had tried unsuccessfully to produce a satellite that would use electronics to beam its photographs down to earth, the CIA's CORONA program concentrated on producing a satellite that would simply put its photographs into a canister that could be dropped down and recovered from wherever it landed.

To make sure that the DOD didn't feel slighted, on February 7, 1958 Eisenhower also created the Advanced Research Projects Agency (ARPA), which later became the Defense Advanced Research Projects Agency (DARPA). The DOD could also console itself with the fact that it still operated the Space Surveillance Network, which ever since 1957 has used ground-based radar and optical sensing equipment to detect, identify, track and catalogue all the artificial objects orbiting Earth, including satellites (both active and inactive), spent rocket bodies and other pieces of debris, even those as small as baseballs.

It took the CIA over a year and 14 separate launches before it finally managed to get an operational CORONA satellite placed in orbit. But Eisenhower deemed it worth the expense and the wait. In a single day, the satellite's Keyhole-1 camera -- which could "resolve" upon objects as small as 40 feet long -- photographed more of the Soviet Union than had been photographed over a period of years by all of the Air Force's U-2 spy planes put together.

In 1963, CORONA was supplemented by GAMBIT, a "close-look" or "spotting" satellite designed to target specifics areas. Thanks to its high-resolution Keyhole-7 camera, which could resolve upon objects as small as 18 inches long, GAMBIT was able to take photographs useful for detailed intelligence work, such as inspecting foreign weapons systems. After GAMBIT, the CIA developed HEXAGON, which could cover even more ground than CORONA and yet still resolve upon objects as small as 1 or 2 feet long. At the same time (the early 1970s), the Air Force developed the Defence Support Program, which placed a constellation of satellites in geostationary orbit around the Earth. Unlike their predecessors, these satellites contained infrared sensors as well as photographic cameras, which allowed them to work at night and/or despite the presence of heavy cloud cover.

According to the European Parliament and other researchers, the early 1970s was also the period in which the various American intelligence-gathering agencies -- trying to keep up with the satellite launches of the International Telecommunications Satellite Organization, formed in 1964 and capable of providing truly global coverage in 1968 -- developed the ECHELON system. Built upon a 1947 intelligence-sharing agreement between the USA, Canada, England, Australia and New Zealand, the ECHELON system uses immense ground-based listening stations (see picture below) to intercept and eavesdrop upon satellite-based communications. These listening stations are dispersed throughout the world, in such places as Yakima (Washington State, USA), Sugar Grove (West Virginia, USA), Menwith Hill (England), Hong Kong, Guam, Misawa Air Base (Japan), and Sabana Seca (Puerto Rico); they allow the English-speaking countries (the USA, mostly) to eavesdrop upon what the rest of the world is saying in their faxes, telexes and international telephone calls. 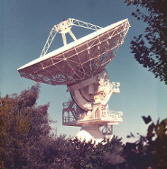 By 1976, satellites such as CRYSTAL were finally able to do what Eisenhower wanted the Air Force's first satellites to do, namely, use electronic signals to relay images down to earth as soon as they are captured by the satellite's (Keyhole-11) cameras. But, despite their incredible sophistication, these space-to-earth transmissions -- like all wireless broadcasts -- were and still are vulnerable to interception.

In 1982, the Department of Defense starting launching the first of the 24 satellites that today enable the operation of the Global Positioning System (GPS). Because it is the subject of a vast and rapidly expanding literature, GPS has been taken up in a separate entry, to be found here.