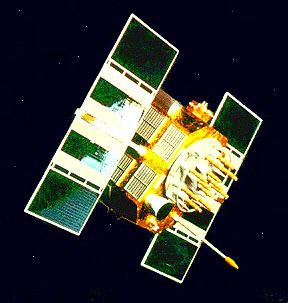 In 1982, the United States' Department of Defense launched and began operating the Navstar Global Positioning System (GPS), which is composed of 24 geo-rotational satellites that orbit the Earth at a distance of 12,660 miles. These satellites have been placed and programmed so that, no matter where on Earth you might stand, there will always be several of them (between 5 and 8) above you and, more to the point, in a direct line of sight with you. (You can see them at night, moving very slowly through the sky.) Because of this system, nothing, neither movements on the ground nor the orbits of the satellites themselves, will cause a temporary blind spot or gap in this truly global, continuously provided coverage from space.

Some satellites use sophisticated cameras that can "see" objects illuminated by visible light ("sunlight"), infra-red light, radar pulses, or emissions of heat. GPS satellites, by contract, use sophisticated antennae that "hear" the inaudible electronic bleeps that are sent out every 15 minutes by GPS transponders. The GPS satellites then send messages back down to the ground (or elsewhere in space), messages that detail the identities and precise locations of the transponders that were "heard from." If one has a GPS receiver as well as a transponder, one can use the "Navstar" system -- "Navigation by the stars" -- to ascertain one's precise location every 15 minutes and thus navigate one's way, despite bad weather, either on the ground, on the high seas, or in the air.

But the GPS system is much more than a navigational system if transponders are no longer paired with receivers, that is, if people start using the system, not to keep track of their own movements, but the movements of other people. Then the GPS system is (also) a gigantic surveillance apparatus. If you can stick a transponder (a mere microchip, if need be) on or into it, no matter what it is, you can surveill it -- that is, keep track of its movements on a continuous and open-ended basis -- no matter where on Earth it goes. And "it" can be just about anyone or anything (i.e., chattel): a child; a pet; someone under medical quarantine; a criminal under house-arrest; a suspected terrorist; an ex-lover; a farm animal; a cell-phone; a rented car; a truck carrying valuable goods; a commercial airliner; a military asset; etc etc.

To make sure that it gives away none of its own secrets, the Department of Defense has designed the GPS system so that it produces two flows of information: a "robust" one (nearly instantaneous and accurate within 30 meters), which is designed for the exclusive use of the US military; and a "degraded" one (time-delayed and accurate within 100 meters), which is designed for everyone else. No doubt the GPS system is also designed so that the Department of Defense can tap into and monitor any and all non-military uses of the system. This should alarm you, Dear Reader, because it means that any GPS transponder in the world can be entered into the US military's target-acquisition systems and destroyed by precision-guided weapons.