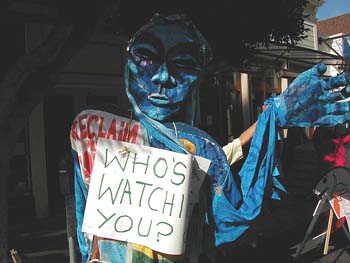 A special message from the New York Surveillance Camera Players.

On 09.07.01, in conjunction with other autonomous groups and SCPs across the globe, the San Francisco Surveillance Camera Players (SF SCP) participated in the international day of protest against surveillance. The SF SCP exploded onto the scene of our "brave new world" with their debut performance. There was one planned performance and a few impromptu encore performances at various surveillance cameras throughout SF. The text that follows describes my experience as a participant at one of the locations.

On september 07, 2001 at aproximately 3:45 pm PST, I [Pulsar] arrived at the corner of Fillmore and Union streets where I met a fellow player. We proceeded to scout the location of our performance in order to gain maximum exposure via a webcam that is located at the office of a company called mapwest.

We were waiting for the arrival of the puppets (a large merman wearing a placard that said "Who's watching you" and 2 fishes on sticks) that we were going to use for the performance. While we were waiting for another one of the players to show up, I gave an interview with a Berkeley journalism student who was making a documentary about privacy. I had written several messages (are we fish in an aquarium watched by our owners? or are we free people? something fishy is going on) on cardboard to use in conjunction with the performance but various factors (the distance between the cam and the visual area, the refresh rate on the website, etc.) prevented them from being effective.

The puppets arrived at about 4:00 pm PST and we proceeded across the street to the area we felt would be most visible to the cameras. The large puppet was set up by a couple of fellow players. As this was occuring, some more players arrived in good cheer, ready to "break a leg". So there we were - standing in front of the camera. People on the street were looking at us and they were obviously wondering what the hell we were doing. As the curiosity of people became greater, I began to hand out flyers, answer people's questions and to point out the web cam and a surveillance camera we just discovered on top of the mapwest building. People who worked in the neighborhood and others were surprised to learn they were being watched by a tiny web cam mounted in the window of what looks like an apartment on the second floor of the building. Many also expressed surprise concerning the level of surveillance in the area, as some of the players discovered other surveillance cameras on Union St. Overall people were very supportive of the performance and curious to learn more about the encroachment of surveillance on our everyday lives.

After standing for a while in front of the web cam and waving at the employees of mapwest, a young lady walked briskly towards us from across the street. She asked "Who are you?" to which I responded "Who are you?". It was my impression that she was an employee, owner or manager of mapwest. Her response to my question was "That was not the question I asked", as if she had some authority over me that made her question more important than mine. I responded by handing her a flyer. I was intent on avoiding conflict with her. She then said that the web cam was for "tourists, to convince them to come to San Francsisco" implying that we would somehow affect the SF tourism industry by our performance. I responded by saying "I live here" to which she snappily responded "you don't live here" pointing to the space in front of the camera. She then made it a point to attack the sign of a fellow player which said "kill white" on yellow legal paper. The player explained that the sign was a reference to hackers, what I presumed to mean "white hat" hackers. She was rather flustered after this and she said "You must be on something" and insinuated that we must be crazy. She then left because she could not legally force us to leave the area in front of the web camera. After she left, I proceeded to yell "high mom" and waving at the camera to illustrate the fact that we were in front of a camera and being watched. It's amazing how disturbed some people get when people act beyond the imaginary rules about how one is to behave in public.

The players stood there for about another 10 to 15 minutes in front of the camera. I continued to hand out flyers and converse with people. The police showed up in a cruiser and asked us what we were doing. I handed an officer a flyer which he read. We were about to leave as the cop pulled up anyway. We packed up and left the scene.

Overall the day was a great succes and I felt we were effective in raising the awareness of the SF general public about the encroachment of surveillance on our lives. I think we may have also succeeded in raising awareness of the possibilities of resistance to the measures of police-state like control that surveillance represents in a supposedly free and democratic society.


Photographs from the performance: read this!; the puppet; and saluting the camera outside of Justin Herman.