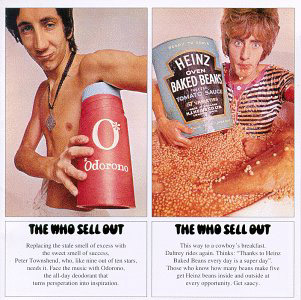 On 7 July 2004, Pete Townshend announced that more than a year ago, he had refused to let Michael Moore use the Who's 1971 song "Won't Get Fooled Again" in Fahrenheit 911. In Townshend's own words,

I had not really been convinced by Bowling For Columbine and had been worried about its accuracy. To me, it felt like a bullying film [...] Once I had an idea what Fahrenheit 9/11 was about, I was 90 per cent certain my song was not right for them and pointed out that "Won't Get Fooled Again" is not an unconditionally anti-war song, or a song for or against revolution. It actually questions the heart of democracy: we vote heartily for leaders who we subsequently always seem to find wanting. (WGFA ["Won't Get Fooled Again"] is a song sung by a fictional character from my 1971 script called LIFEHOUSE. The character is someone who is frightened by the slick way in which truth can be twisted by clever politicians and revolutionaries alike).

Townshend is partially right about "Won't Get Fooled Again": while it's true that the lyrics of the song are "against" revolution, the music -- especially the use of sequenced synthesizers -- is clearly revolutionary, or, rather, was clearly revolutionary for the time at which the song was released. That's precisely why the song is famous and worth fighting about: the tension in it, and the release that's provided by the legendary scream "Yeah!" that comes after the long instrumental break. The listener doesn't need to be "convinced" by the song (what a ridiculous idea!); the listener need only feel it.

No matter. As we've noted elsewhere, this same song -- meet the new song, same as the old song -- deemed was "right" for licensing to the MSNBC cable news program Hardball with Chris Matthews in November 2003, six months after Townshend's contact with Moore. And so Mr Townshend, he has strongly held political beliefs. He was convinced by Chris Matthews, but not by Michael Moore. A year ago, Townshend was convinced that going to war against Iraq was justified, "but now, like millions of others, I am less sure we did the right thing." (If asked, Townshend would surely go on to explain that a full withdrawal of troops from Iraq could only take place after he -- and millions of others -- became convinced that "we" did the wrong thing by killing all those innocent people.) Typical self-satisfied Bush-Blair bullshit.

Does this mean that there were also strongly held political beliefs behind Townshend's September 2003 decision to allow the makers of the "Hummer" (a truck invented by the US military and now sold commercially) to use the Who song "Happy Jack" in its TV commercials? Quite possibly. But what about the other TV commercials Townshend has allowed in the last few years? The "Overture" from Tommy was used in a spot for the anti-allergy medication Claritin; the title track from the Who Are You? album was used in a station-ID clip for the cable TV station TNN; and the solo-album hit "Let my Love Open the Door" was used in a station-ID clip for NBC-TV. None of these decisions smack of a Bush-Blair political ideology, nor of any other ideology, for that matter; what they do smack of is cynicism and greed.