When Does Intelligence Become Snooping? 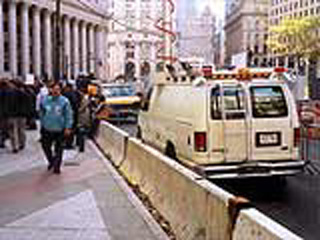 NEW YORK -- By the nature of their work, police have always been a focus of media attention. Now, instead of merely appearing on news broadcasts, police are purchasing the equipment needed to make their own private broadcasts. In recent years, large departments have been outfitting video units with sophisticated cameras and microwave broadcast technology. The systems can relay live video from, say, the scene of a demonstration to police headquarters downtown, where coffee-swigging commanders can keep tabs on the action from a newsroom-style command center. Departments have equipped helicopters with microwave-transmitting cameras that can pick up a car's license plate from a half-mile away and broadcast it to police on the ground. And they've even begun to cover events using the ubiquitous electronic news-gathering (ENG) vans, with their trademark telescoping microwave transmitters rising from the roof.

Lawmen say the new technology allows them to deploy police officers more effectively, in cases of demonstrations that threaten trouble or in order to reduce traffic to and from planned events. Officers say they analyze the live video that gets streamed to headquarters, looking for gaps in police coverage. Live broadcasts can also help stop a crime in progress.

"You've got to understand the advantage of having a helicopter in the sky. If you're a bad guy, you just can't get away," said Steve Yanke, a salesman at San Diego's Broadcast Microwave Services, a company that targets the police market. And at large events or political demonstrations, video cameras can scan the crowds, with officers monitoring broadcasts for faces of known troublemakers or terrorists. "It doesn't do any good to tape them and drag the tape back to headquarters to look at," said Yanke. "Those people move."

For some, police use of broadcast technology -- and video in general -- smacks of Big Brother-style meddling in citizens' private lives. Officers wielding cameras has a chilling effect on free speech and assembly rights, they say. "It discourages people from using their constitutional right to speak or to petition the government for rights and grievances," said Barry Steinhardt, associate director of the American Civil Liberties Union. Steinhardt said he worries that the new technology allows the police to analyze live footage with facial recognition software and create photographic databases of political activists and demonstrators. "If these people are criminals, fine. Let the police arrest them," he said. "But if they're political opponents of the mayor, the police have no business engaging in surveillance." Courts would take a dim view of such police actions, Steinhardt said.

Even before broadcast, police have long taken advantage of -- and been dogged by -- video recordings. Private videographers have drawn attention to police brutality, in cases such as the Rodney King beating in Los Angeles. And police have used video cameras to aid in prosecutions. Police routinely use cameras mounted inside patrol cars to film traffic stops. The tapes help officers contest brutality charges and win convictions. For example, an embarrassing videotape might be enough to convince a drunken driving suspect to plead guilty. "It keeps everyone honest," said Yanke.

Being so close to Hollywood, the Los Angeles Police Department (LAPD) became a police video pioneer, rolling cameras as early as 1972. Now, the department operates a sophisticated microwave network that employs transmitters in three ENG trucks and several helicopters. In Los Angeles, police use broadcast technology for crowd and traffic control at large events, such as the recent Emmy awards ceremony, said Larry Fugate, principal photographer with the LAPD's 11-person video unit. "They're not looking for criminals, per se -- although we have done that," said Fugate. Commanders at police headquarters monitor the broadcasts, asking the cameramen to focus on crowds and traffic situations in order to deploy officers more efficiently, Fugate said. "They'll say 'Look, there's a crowd forming on Fifth and Wall. We need a horse over there,'" said Fugate. "It allows a smaller police presence. We can put officers where they're needed."

In San Diego, police began live broadcasts when the Republican National Convention rolled into town in 1996. Camera operators on the ground and in helicopters beamed a stream of images to police headquarters, where commanders were able to monitor crowds, traffic and keep an eye out for troublemakers, said police spokesman Dave Cohen. At one point, the police transmission interfered with NBC's signal, and an NBC engineer had to help the police adjust their broadcast signal, Cohen said.

At Yanke's Broadcast Microwave Service, a company Web site illustrates the value of airborne broadcasting. A diagram on the page depicts a helicopter camera shooting video of a gunman holding hostages on a city bus. The helicopter is simultaneously broadcasting the video to an officer's nearby patrol car and a monitor in headquarters, where police commanders watch events unfolding. "Helicopter Video Down-Link systems for law enforcement are becoming a necessity," a caption states. "Immediate access to situational video gives ground-based supervisors the information they need to make tactical and manpower decisions during high-risk incidents."

For the most part, the microwave transmitters used by police are the same as those used by the media. But the broadcast frequencies lie in a portion of the spectrum reserved for law enforcement. Departments' first purchases tend to be equipment needed to transmit live from a helicopter to a central receiving site, usually at police headquarters, said Yanke. Armed with a helicopter transmitter, departments purchase ENG trucks and relay transmitters that can sit atop tall buildings and mountains and bounce the signal from the field to headquarters, Yanke said.

There are also covert uses for police broadcast technology, such as hidden cameras and microwave transmitters used for surveillance of criminal suspects. Salesmen for NS Microwave, a Spring Valley, Calif., company that caters to the police market, say they keep the more cloak-and-dagger microwave technology the company sells as secret as possible, so as not to compromise its effectiveness.

"We can't talk about it," said Louis Tabeek, a former New York Police Department officer who operates from an office in Staten Island. "A lot of [police departments] won't buy from you if you give out information." Among the company's products are video-equipped emergency command posts for city police departments that can receive live transmissions from helicopters and ENG trucks, which they also equip. The company also sells surveillance technology that allows police to monitor hidden cameras that broadcast over the Internet, using videoconferencing software. "It allows you to sit at your desk and basically watch people," said Bill Barlow, an NS Microwave salesman.

(Written by Jim Krane and published on 15 November 1999 by APBnews.)