Occupied as he is by what I will describe, Niccolo belatedly responds through me to your letter,[1] which only arrived ten days ago. He tells me to say this to you: there is in fact a great contradiction between the two letters in question,[2] as there was a difference between what he thought before thinking to write what must be said on the question and what he had to think to write about it. Of the hypotheses that you have advanced, he excludes the first two, and does not judge himself to be in the best position to judge the third one – which in my opinion cannot be excluded. He maintains that sometimes having to do [so] with respect to the one who, on certain delicate subjects, is not mistaken, is for him a kind of facilitation for deceiving himself. Though I find this explanation to be a little extravagant, it seems to me that he is like that, although I cannot find the precise reason for it, and it seems to me that, for Niccolo, who is habituated by bad education to always go into debt, it is easier to continue to do so than to settle up or even to stop himself. Deplorable though such an attitude is, I know him well enough to know that he is usually more able to recognize an imbecile’s bullshit than the reason where it is. Spontaneously, his judgment is completely right, but afterwards, by dint of reasoning, he distances himself from it and he takes off with his baggage of sophisms, in which he would not wallow if he were not so sfacciato.[3]


Author’s note dated 29 April 2013: this is the first part of my letter of 24 September 1978, in which I responded to Guy’s three questions. My letter was signed “Guicciardini.” It was four pages long. I could not speak of the German anarchist in this letter, and this explains its convoluted structure.[4] Later on, I touched upon Remedy for Everything,[5] which was in the process of being typed up, and the risks that I was running, not only where the police were concerned, but also with respect to the Stalinists: the unknown people who were wandering around my house and who had cut the chain that blocked entrance to my private road; the fire that had been set at my house the previous Sunday;[6] other provocateurs who had cut down the two oak trees in my fields and who had threatened me with another fire; the fact that I perhaps needed to distance myself from the place; the very suspect mail carrier who was a stoolpigeon for the cops (he lived next door to my property);[7] the letters from Guy that arrived open; the new vineyards that I was preparing; how the publication of Remedy to Everything would be accompanied by a scandal perpetrated by the wildcat workers and friends at the Motta and Alemagna factories in Milan, plus a postscript in which I announced the occurrence of another fire (previously threatened) set on my property just before I sent off the letter, on 27 September.

[3] Translator: Italian for “impudent” or “cheeky.”

[4] Translator: in his letter to Mustapha Khayati dated 10 December 2012, Sanguinetti recounts that, at the time, “I had first-hand information from a German anarchist in the R.A.F. who was close to me at the time. I had previously seen her battle courageously at the barricades in Bologna in September 1977. Shortly afterwards, she immediately denounced the assassination of Andreas Baader, Gudrun Ensslin and Jan-Karl Raspe in the prison at Stammheim. She was persecuted and quickly arrested by the Italian police at the behest of the Germans, who wanted to extradite her. She was also in contact with stray Italian terrorists of good faith; she had first-hand news; and thus, in my letter to Guy, I tried to envision things in the perspective of the information that I had come to learn in this fashion, without being able to discern how much of it was true or uncertain, nor was I (obviously cautious) able to cite my sources.”

[5] Translator: to date, only parts of Remedy for Everything have been published, most notably the chapter entitled On Terrorism and the State.

[6] Translator: cf. the photo at the bottom of this page. It was taken from within Sanguinetti’s house, and shows that the blaze came within 90 meters of it.

[7] Author’s note 29 April 2013: nota bene that three weeks ago, on 8 April 2013, the newspapers in Florence announced that this very mail carrier – who had an arsenal in his house – had blown himself up trying to get rid of the TNT that he possessed by exploding it in the fields next to my house, and that he is now in a coma in a hospital. 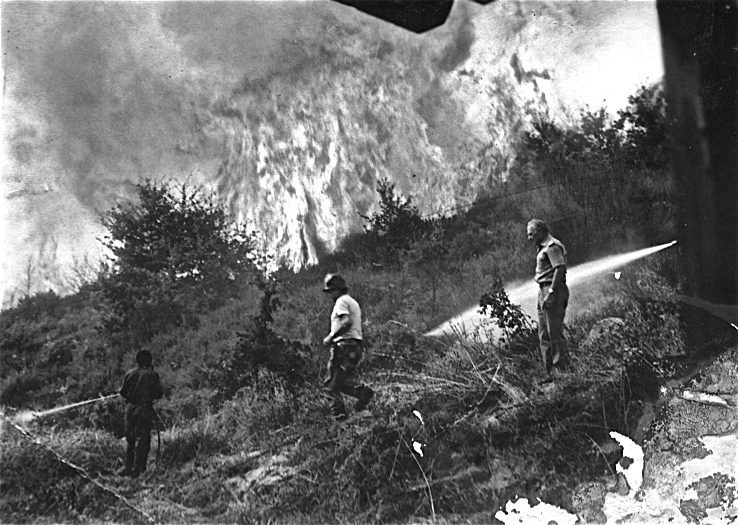 (Translated from the French 11 May 2013 by NOT BORED! Footnotes as indicated. Photo provided by G. Sanguinetti. Thanks to Fabrice De San Mateo.)