An International Day of Action Against Video Surveillance 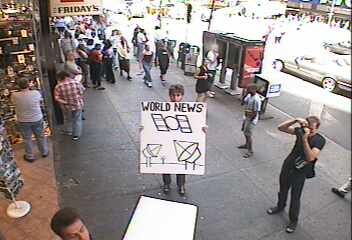 On Friday, 7 September 2001, a total of 23 groups from all over the world (8 different countries) protested against the video surveillance of public places.


Press coverage of the event was very, very strong.

In Italian: article published by Neural and translated into English.


Here are some reports from the participants in 7s01.

England: FANCLUB video here. It isn't compressed and takes fucking forever to download. But we are able to present here a great picture taken from it, as well as four excellent photographs of the performances taken by Tash: 1, 2, 3, and 4.

France: For us [Souriez, Vous Etes Filmes], the symbolic action in Paris took place at around 11:30 am in front of the Museum of "The Big Gallery of the Evolution of the Species" at the Jardin des Plantes. We didn't have many people in attendance (a total of 10) but, all the same, there was one police officer for every two demonstrators! We wore animal masks (sheep, dogs, pigs). The theme of the action was, "From the monkey to the sheep: what evolution?!" At the same time as the demonstration, every 5 seconds our web site showed a picture of sheep standing around in the garden of Sacre Coeur. Click here to see the picture. A journalist from the Agence France Press was in attendance, as were a photographer and other journalists with cameras. Over the course of a half-hour, we unfurled a banner that proclaimed "No to video policing! Remove the cameras!" and distributed a flyer that explained our actions. The demonstration ended without encountering any opposition from the police. This first attempt at coordinating international opposition to video surveillance -- in which we played a small part, as a result of the difficulties in France of returning from the summer holidays -- involved the participation of 21 groups in 6 countries. We hope to participate in other collective international actions with the national groups in the various French cities that coordinated the 9-16 June 2001 week of actions against video surveillance.

Germany: 1) We [Aktuelle Kamera in Bremen] watched performances in Arizona, Minneapolis and New York by webcam and saved images. We will put the screenshots on our web site soon. We've had about 2,000 hits on the 7s01 web page on our site over the course of the last 36 hours. Unfortunately, the webcam in Berlin was off-line during the performance period, so their action took place without web-transmission. The Bremen group had problems with heavy rain, storms and slow refresh times, so they did a 1.5 hour slideshow via the web to bring our issues to the public, while the activists performed in front of the webcam and handed out flyers. Click here to see a picture from the slide-show. All other actions in Bremen with "tv control" were beset by the same problems as in Bremen, but all of the 19 participating groups dealt with the situation and went on with the show. ("tv control" was a kind of reclaim the media action and received some press coverage in German). 2) In Leipzig, people did some actions, but not in front of any web cameras. 3) In Berlin, Tina did not really build fake cameras. Instead, she decided that posters of cameras would be better, and so she put up black-and-white computer drawings of surveillance cameras in various places in the Berlin North Train Station, as well as in the NGBK Exhbition, so that other people could up the posters up for themselves.

Sweden:: a newly formed group called SOT (Stockholms Overvakningskamerateater) peformed on 7 September 2001. Our first play was simple but nevertheless an important piece of art. "Is there someone in there?" was the title and also describes the action, in which we walked around town trying to get in contact with the people behind the surveillance cameras. Using a large, hand-printed placard, we invited them to call us on a mobile telephone number. But our attempts to communicate with those watching the monitors were fruitless, so the play turned out to be a real Beckett tragedy, i.e., waiting for someone who never calls.

USA: 1) It took only 10 minutes for campus security guards to get "on the scene" and demand that The Praxis Group cease and desist. But the group -- which sported their trademark white lab coats for the occasion -- still managed to get their message on the World Wide Web via the University of Minneapolis's webcam. Available pictures: 7 sep 01: a performance; using a cellphone to see how it looks; changing pages; arguing with the nice lady from campus security; "We are being kicked out"; and waving bye-bye. 2) At long last, there's now an SCP group in San Francisco! Click here to read Pulsar's account and see pictures. 3) A report about and pictures from the Arizona SCP's performances in Tempe can be accessed at the bottom of this page. 4) A report from the NYC SCP can be found here. 5) Click here for a photograph of Kathy Chenoweth's Los Angeles performance.